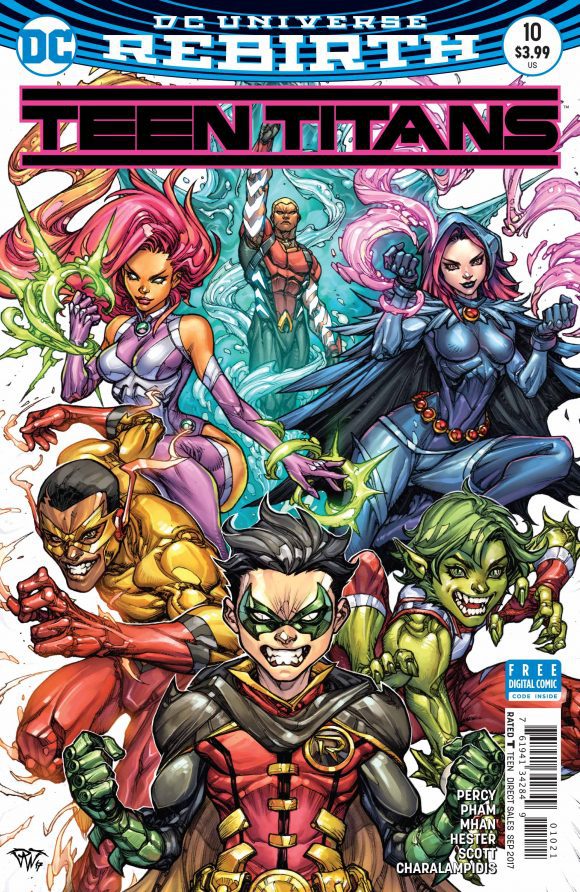 Benjamin Percy delivers a fast paced and well scripted tenth issue that continues to shift the dynamics of the Teen Titans. A number of story points finally reach a turning point in issue #10 and the future of the characterization appears stronger because of it. After the past few issues of Robin storming forward as the team leader, Percy depicts him reaching out to his father for guidance. Starfire steps off the sidelines after ten issues and uses her experience to guide the team. And Jackson Hyde discovers that the father is had searched for his entire life is Black Manta.

Robin was the defacto leader of the Teen Titans by his force of will and naive self-confidence. This was running theme in Percy’s Teen Titans since Robin abducted the members of his new team in the first issue. His blind trust in his training and ability has fractured the team. Starfire’s lack of leadership first appeared a weakness for the series, but now can be viewed as a mature decision to provide Damian room to grow and mature. The management adage of “enough rope to hang themselves by” appears to be Starfire’s approach. Rather than demand leadership or fighting for it, she provided Damian the opportunity to lead. As his leadership falls apart, she steps in and takes decisive action. Unfortunately, this storytelling perspective comes from hindsight and not through Percy’s narrative. 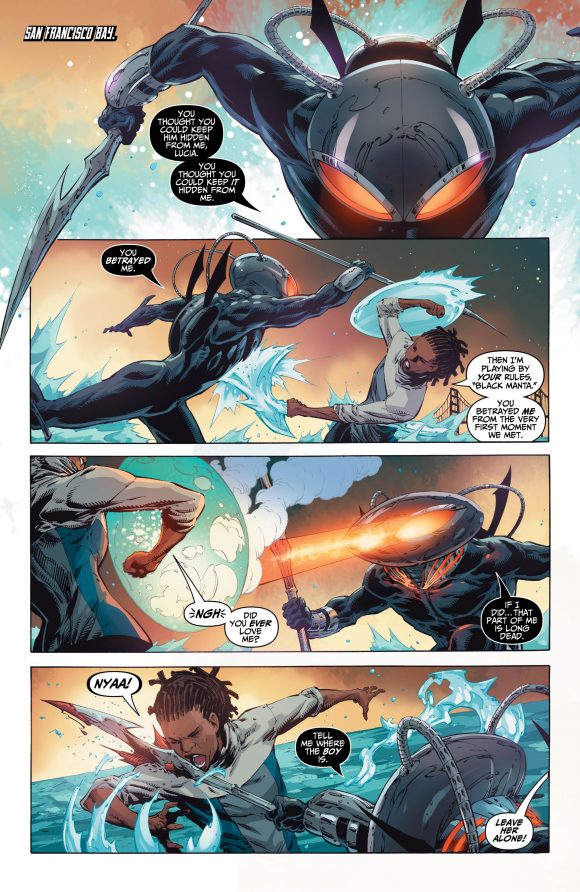 Percy provides readers a reflective glimpse into Robin seeking help from Batman, only to have Batman deny him help. Damian’s upbringing with the League and now with Batman only strengthen his isolation and encourage his unsuccessful heavy handed style. Percy allowed reflective moments over the past few issues for Robin’s character, but the only reflection written for Starfire came from others telling her she should lead. Starfire’s mature hands off approach are there for the reader to conclude if one feels generous.  But if the reader is not as generous, Starfire remains a shell of a character who needed others to tell her what to do.

Percy’s characterizations aside, this issue is a joy to view. Khoi Pham’s artwork remains spectacular. Pham’s art and inks combine to provide a sense of emotion and energy to the page. Guest artist Pop Mhan picks up the artwork for the final pages with Jackson and Black Manta. While Mhan’s art loses the graphical flourishes of Pham’s, it works well for the murky depths of the underwater setting.

Even with the over reliance on Robin and struggles with Starfire’s characterization, Percy crafts an engaging team that continues to discover who they are as individuals and who they want to be as a team. With the amazing artwork of Pham guiding the action and emotion, Teen Titans #10 remains a solid issue.