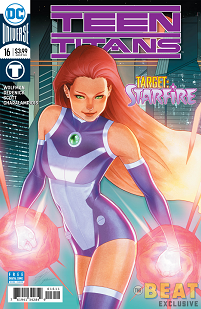 The new issue of Teen Titans focuses on Starfire and this time we have co-creator Marv Wolfman taking us through the issue. One of the biggest things readers will notice is the absence of other members such as Kid Flash and Robin. We’re not even really given a reason why they are missing in the issue and it seems Wolfman wanted to only write Starfire being surrounded by other members of his run when he started The New Teen Titans being Beast Boy and Raven. I have had my personal ups and downs with this current run but one of the biggest positive standouts is the art and the work by the whole art team has at the very least been quite fantastic as everything just really pops.

The issue surrounding Starfire has her wondering why Beast Boy wanted to keep her dismissed in an earlier conversation. This does play into how Kori does 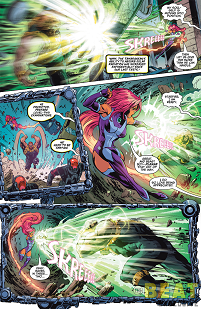 tend to overthink things and then goes off to wonder on her own, only to have to fight old enemies in her past life. I was very surprised how much action there was in this issue as I figured it would be a more personal issue to give Kori more growth as a character. I absolutely love how strong will she is when she deals with the enemies of her past showing that she will never become someone’s prisoner again. That part of her is something I always liked which shows why she cares so much for life and other people’s well being.

As a Starfire fan, I was, for the most part, pleased with this issue. I don’t think a new reader would enjoy it as much though if they were hoping to see more of a character development type of story. If this story was actually two issues long, I think that would’ve helped flesh things out more for Kori and not have the confrontation with her enemies swept through so quickly. There’s enough here to keep current readers and fans of the series satisfied.   I even think it can interest new readers to jump in on the book, as Wolfman is still able to tell a small and enjoyable story. I just don’t feel like the issue took full advantage of showcasing a character to their fullest. Starfire’s abilities were definitely a highlight in the issue but we only get a glimpse of why she has a growing fanbase.