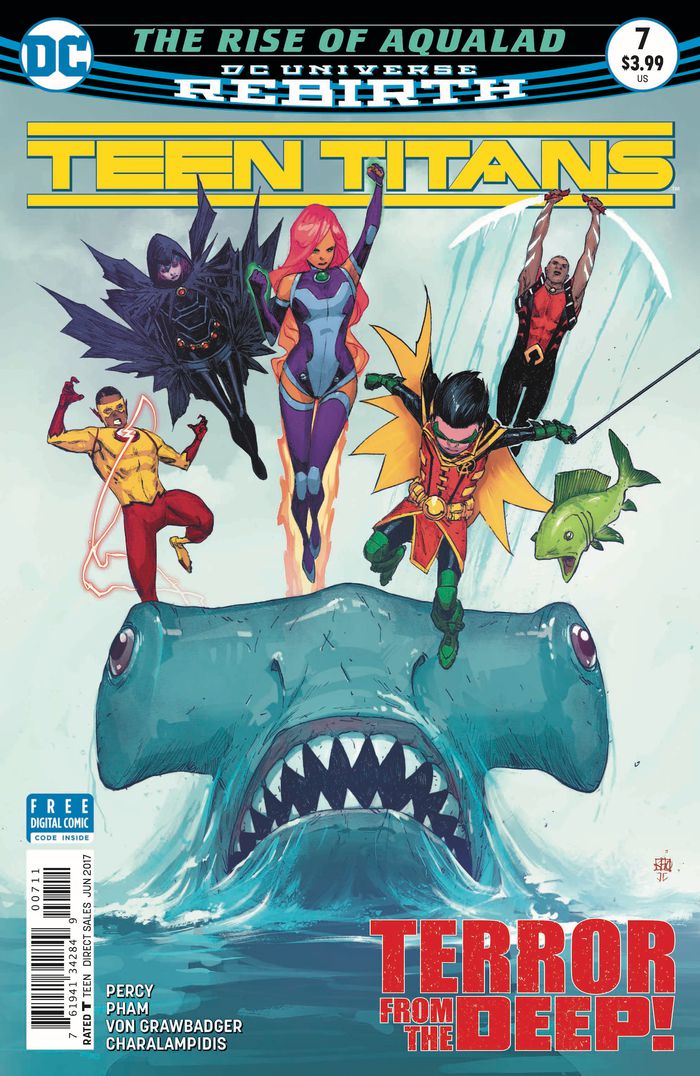 Benjamin Percy’s Teen Titans #7 continues to develop team chemistry and the team roster. Issue #6 introduced readers to Jackson Hyde, Aqualad. Issue #7 introduces the Teen Titans to Aqualad moments after King Shark has attacked. King Shark’s attack and abduction of hostages was not clearly explained in the last issue, nor is it fully explored in this issue. Percy uses King Shark and his mutated convicts more as a setting than as characters. It is not until the final pages that readers are teased with a deeper connection between King Shark and the secret organization N.E.M.O.

Jackson Hyde’s introduction last issue was excellent. Readers discovered a teenager encouraged to hide both his abilities and his sexual orientation. In this issue, Hyde’s influence is muted as he is still learning what his powers are, but Aqualad jumps into the action. The Teen Titans begin to realize they need to work together as a cohesive team. After being pulled together by Damien, and choosing to stay together, they are individuals still learning how to rely on each other. This struggling team dynamic is an excellent reflection of how teens, and most people, struggle to balance self-assured independence with a reliance and trust in others.

Percy’s use of this developing team dynamic creates the potential for continued character growth and development. Unlike their older counter parts in Titans, these Teen Titans are not long time friends with established, trusting relationships. Damien is controlling, brash, and often right. Kid Flash is still learning how to coordinate with others. And now, Aqualad is another costumed character new to being a hero. Percy has created a strong team makeup, but there are still missed opportunities with Starfire and Raven.

Percy has not focused on the two female members of the team. Starfire has a long history with multiple iterations of the Teen Titans. While the extent of her canon is still undetermined in the new Rebirth Universe, Starfire’s experience is still greater than any on the current roster. Some development in her character or the acknowledgment of her experience over the teenage Damien would create additional story conflict opportunities. Raven’s experiences with the former Teen Titans and the extent of her powers is another missed opportunity. In Raven’s case, there are future solicits that suggest Raven and her father as the central story arc. 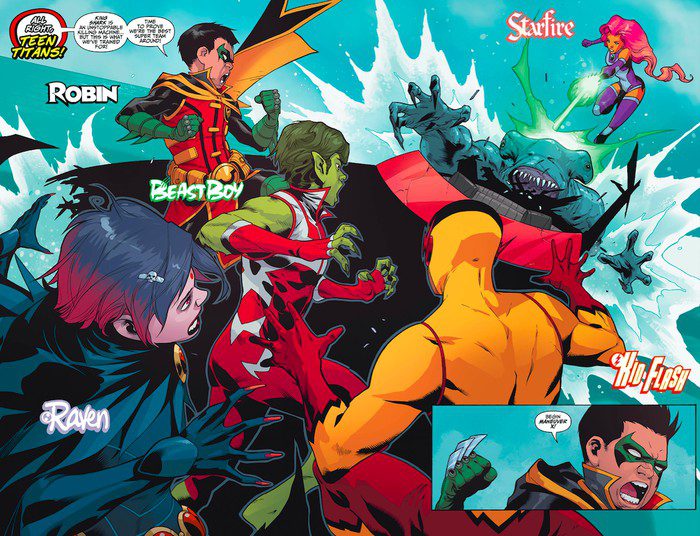 While Teen Titans #7 serves up a nice introduction for Aqualad, there are lingering concerns with Percy’s character balance and lack of strong female characterization. Once the introductions are over, the growing team dynamics provide opportunity for continued conflicts and character growth.  Concerns aside, Percy has created an engaging group of heroes that is still learning who they are as individuals and as a team.