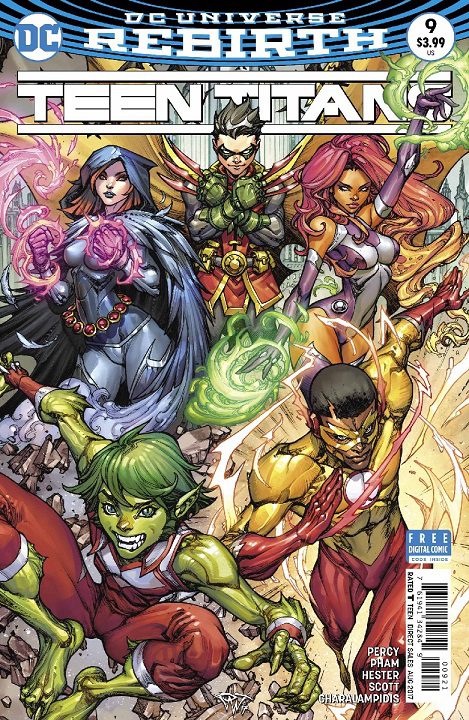 The fallout from the previous issues Lazarus Contract storyline concludes with Teen Titans #9. The final pages of the Teen Titans Annual had a direct impact for Deathstroke, the Titans, and the Teen Titans. In that issue, Damian Wayne, Robin, fired Wally West, Kid Flash, from the team and issue #9 deals with the aftermath. Writer Benjamin Percy keeps the pressure on the team as they learn to work together and struggle with Damian’s decision to dismiss Kid Flash. In addition, this new arc begins to explore Jackson Hyde’s backstory.

Percy wisely keeps the timeline of the issue tightly focused on the aftermath of the Lazarus Contract crossover. Rather than jumping ahead into a new conflict, Percy allows space for these teenagers to struggle with their own identity, along with the identity of the team. Robin works on training Jackson Hyde but takes out his frustration about Kid Flash. Robin’s cold calculating demeanor may be challenged by the sense of community that other members of the team try to create. Percy has teased a romantic interest between Raven and Kid Flash, but he lets them appropriately stumble as teenagers might.

Starfire and Beast Boy are still underused characters in this Robin led team. Both characters have more team experience but have not directly challenged Robin yet. Percy has a solid foundation to create additional conflict within the group when he needs to add a dynamic, but the lack of interaction between Starfire and Robin continues to be a missed opportunity. With the shifting cannon around pre-Flashpoint, Flashpoint, and now Rebirth, Percy’s avoidance of Starfire and Beastboy’s experience may be an editorial decision to reduce the number of conflicts and questions that it could create. Regardless of the rationale, long term fans may view the lack of integration as a slight to past histories. 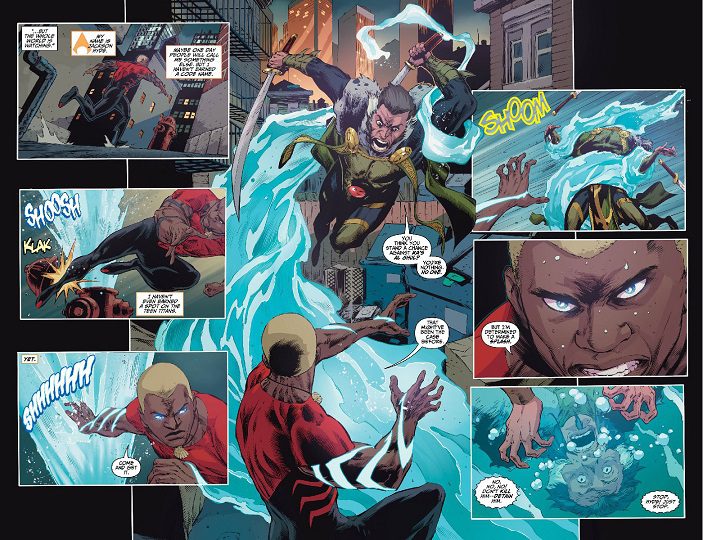 That said, Teen Titans remains an excellent book for new readers to jump into. Issue #9 provides an easy introduction to most of the team and does not rely on past references to build the story. Each character struggles to understand themselves and their teammates, while Percy continues to introduce character history. Jackson Hyde, the future Aqualad, explores his past with his mother and the cliffhanger confrontation with Black Manta implies that Hyde will face his full history during this current arc.

Anyone turned away from picking up the past issue as a result of the crossover, has no reason not to give this series a try. Benjamin Percy continues to expand and develop team members and his scripting makes it easy for any reader to join in. While not all team members are developed yet if Percy takes the same care that he does with Aqualad in issue #9, eventually readers will be rewarded.