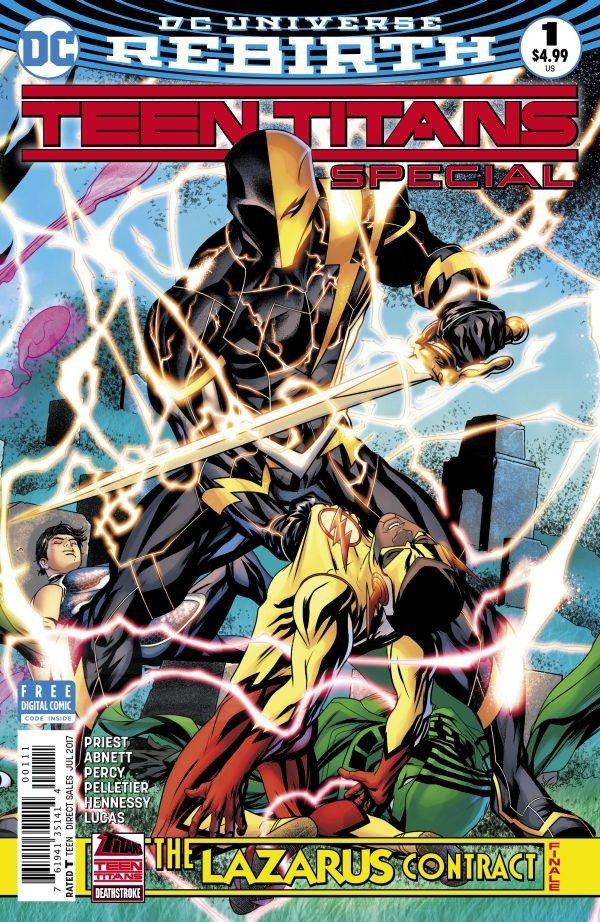 The “Lazarus Contract” spanned the Titans, Teen Titans, Deathstroke, and finished in the Teen Titans Annual #1. It was a four-part story arch that needed more space and time that it received. The story arc started slowly for the first two issues and Deathstroke #19 sped ahead with the story and the pacing. Deathstroke #19 was a solid issue that finally provided hope for this crossover, unfortunately, the promise of an emotional story never comes to fruition.

The Judas Contract is a classic Deathstroke/Teen Titans story and while the name of the crossover alludes to this history, there is little done within the arc to fill readers in on this history. A crossover needs to be inviting to readers of any of the titles and provide ways to catch up with the history being referenced. The central motivation from the referenced Lazarus contract of the title relates to a failed promise by the former pre-New 52 Teen Titans (now the Titans). Readers of Deathstroke understand the failed promise, but there is little to explain the context for fans of the new iteration of the Teen Titans. The context of the failed promise to protect Slade Wilson’s daughter is stretched even further for fans of Priest’s Deathstroke, where Deathstroke has interacted with his daughter multiple times since DC’s Rebirth and even put a hit out on his own daughter to be closer to her.

While the family themes of the conflict do recall classic Deathstroke/Titans/Teen Titans stories, the execution of the crossover feels rushed and underdeveloped. Priest’s Deathstoke series has a distinct pacing and chapter heading style. This style is used here in the finale but was not used during the first two issues. The result creates a less than cohesive experience and contributes to the unfinished sense of the crossover. 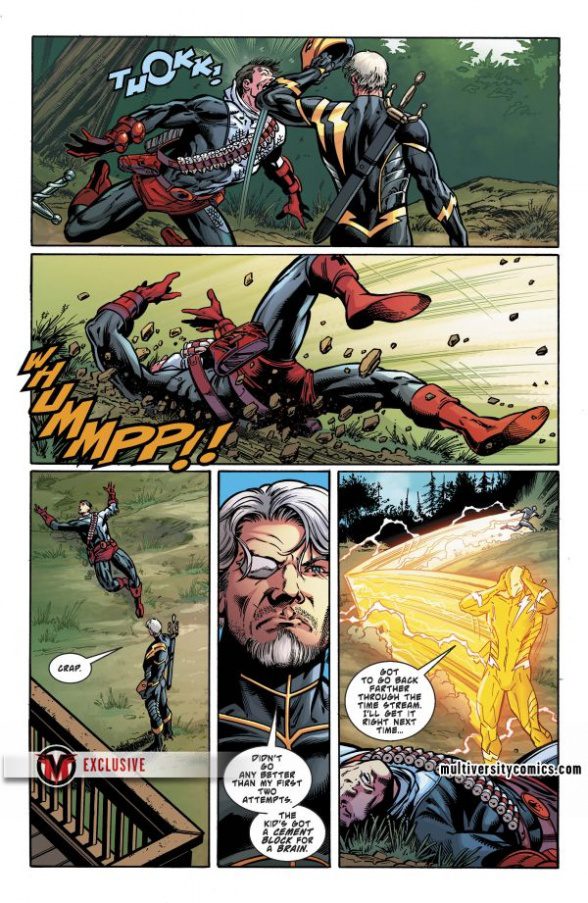 As the finale of the event, this issue does not deliver the emotional weight that was alluded to at the end of Deathstroke #19. The story picks up after Deathstroke has had multiple failed confrontations with his son in the hopes of preventing his death. The weight of the interaction is lessened by having those failed reconciliations off the page. Deathstroke’s use of the speed force and time travel open up a variety of story options, but the conflict wraps up quickly. Readers may infer that Deathstroke’s higher consciousness in the speed force allowed him to see that the reason is son died was not the Titans, but it was his abusiveness as a father that drove his son away. But leaving a conclusion off the page contributes to the lack of resolution.

The Titans and Teen Titans do see action in the final speed force confrontation, but the action is limited and implied through dialog. The dialog confrontation is valuable because it reflects the heart of the storyline – trust and family. Even with this powerful parallel, the conclusion feels rushed and does not invest the time into the characters as the writing team could have.

The “Lazarus Contract” is too rushed for readers of any of the three titles to invest heavily in the conclusion. With a number of plot threads, confrontations, and explanations still lingering, this finale is unsatisfying. While there are potential ramifications for each series at the end of the book, only Deathstroke’s character showed growth.