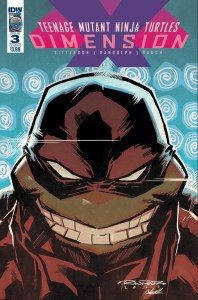 I just have to start out and say, this book is so much fun! It makes me feel like a kid again. While the other TMNT books are tackling things that are a little heavier, this one has stayed light and exciting.

In Teenage Mutant Ninja Turtles: Dimension X, the Turtles are rounding up a few reluctant witnesses for the Trial of Krang. They are having to travel to the far corners of Dimension X to accomplish this, and its just been a fun little jaunt for us. 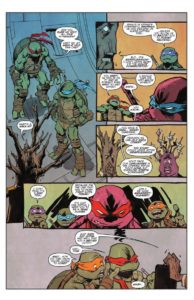 find out that the two aliens are actually wrestling promoters. The two promoters won’t leave until their event, Grappleganza, is over.
So in a completely predictable, yet abundantly entertaining turn of events, the Turtles end up having to fight in the ring to get Stump and Sling to agree to go back with them.Ralph is the first to be persuaded to sign a contract to

Have you seen this:
Comfort Horror: Killer Klowns from Outer Space

Ralph is the first to be persuaded to sign a contract to fight, and lose, in the opening match. In pure Raphael fashion though, he gets angry in the ring and ends up knocking his competitor out. This leads to them having to also fight in the final headlining match, and surprised who shows up… but Krang’s assassin Hakk-R.

This entire comic is just a blast! The art, the story everything. I know this isn’t a main title in the TMNT ongoing story, but it is really worth it to pick this up! So much fun!