Get ready for an explosive first issue as the turtles return as requested by the fans! Gary Carlson and Frank Fosco bring our beloved heroes in a half-shell back on some of their most daring and exciting adventures. This issue sees an invasion of the turtle’s hideout forcing them to rethink their strategies. A cyborg attack led by a mysterious female ninja named Pimiko will push each turtle to their limits to survive. One hero will fall as another hero will be taken from them. Have the turtles and their sensei finally met their match? Or will pizza still be ordered by issue 2?

The turtles are a worldwide phenomenon initially created by Kevin Eastman that led to a successful cartoon series. The story of four ordinary turtles transformed into mutant teenage turtles led by their surrogate rat father figure splinter. There have been various incarnations of our heroes over the years and this first issue does them justice. Each member acts as you would expect: Michelangelo is still the guy with the one-liners, Raphael is the brute force, Donatello the brains and Leonardo their team leader.

The issue opens with an attack on their base and a turtle member being badly wounded leaving only three remaining. The  Cyborgs and their female leader take no time in breaking down the turtle’s defenses and showing off their cybernetic healing abilities. The battle underground continues through most of the issue with a nicely injected recap of their origin story for new readers. Full of non-stop action and incredible artwork the issue culminates in them leaving their destroyed home in search of the fled villains. The story is fast and frantic and exactly how I’d expect to read the turtles. The writing by Gary Carlson is hilarious at times and is ingenious in reflecting their New York residency. It works well in reminding you they are still teenagers and can still good around mid fight. The panels are at time a somewhat confusing to follow here a short the action intensifies midway through but never enough to lose track of what’s happening.

I fully enjoyed this first issue more than I was expecting. It’s more mature than I thought it would be, the artwork suits the ninjas according to their action and the coloring is quite dark and moody. It’s great to see a turtles comic I can enjoy now as an adult from following their colorful cartoons in my youth. I’d recommend this to any fan of the turtles from any of their previous media (cartoons, comics, movies). It’s a fun adventure, it’s brutal and it’s made me want to order pizza. TMNT Urban Legends issue 1 is out NOW! Cowabunga! 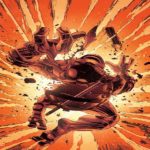