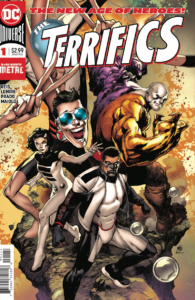 Mister Terrific detects that something is amiss with equipment of his that has been bought up by Simon Stagg. His journey leads him back to the dark multiverse where he picks up a few allies along the way.

When Mister Terrific is written well, he is a force to be reckoned with. In his last solo series Michael Holt talked a lot about how smart he was but we never actually see his brilliance in action. The Terrifics does not have that problem. Right off the bat we see a character that is not only set up as one of the smartest men in the DC Universe but also someone who is ready to lead a team. This issue gets to the point quickly but it never felt rushed. Every character on the team was likable, though our time with this new iteration of Phantom Girl was brief. DC Comic’s Fantastic Four analog kicks off with a strong first issue.

In a recent review, I commented on the shortness of the last issue of the Batman series. The Terrifics however, makes great use of its twenty-one pages. The one problem I had was with the relationship between Metamorpho and Plastic Man. It should be obvious to everyone that this comic book series was inspired by the Fantastic Four. So going for a Human Torch and Thing dynamic between two characters that barely know each other didn’t work. The brotherly bond that is shared with their Marvel counterparts just isn’t there. Hopefully, they don’t try to rush things because as of right now The Terrifics truly does have its own identity. 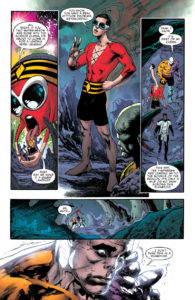 The all-star duo of Ivan Reis and Jeff Lemire are both listed as storytellers and they both brought it with this issue. Reis is one of the best artists in the industry and can make every page feel larger than life. That talent was displayed in the splash page featuring a rather large rotting dead corpse. I had to take a few minutes just to soak in everything that was on that page. The character designs are perfect, which I believe, can be contributed to artist Doc Shaner. It is a wonderful looking book.

Outside of this issue somewhat undercutting what’s going on in Dark Nights: Metal, it hardly had any hiccups and got straight to the formation of the team which I appreciate. The Terrifics #1 is exactly what it needed to be, a fun throwback of a series.

Ivan Reis Jeff Lemire The Terrifics
Are you an Insider?News, reviews, & updates are just the beginning.