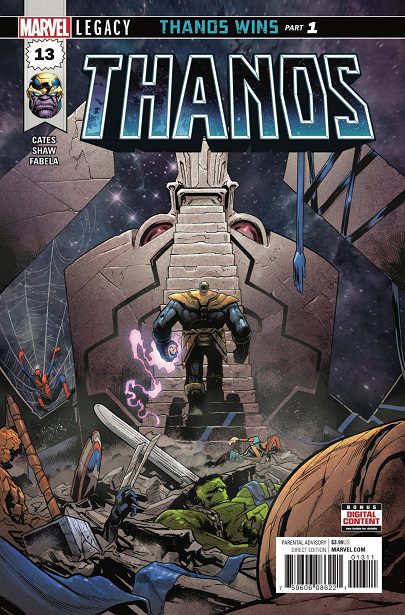 We’re off to a brand new arc with a brand new writer for Marvel’s Thanos series. Donny Cates and Geoff Shaw take over and continue our adventure with the Mad Titan. I have been looking forward to seeing where we would go after Jeff Lemire’s fantastic run and Catres definitely does a fantastic job taking the reigns. Seeing him reclaim his power and his throne was an exciting ride but where would you go from there? One of the best things about this issue is how it reintroduces Thanos. We see a lot of powerful characters in this world from the Avengers to the deep cosmic with Galactus, but it’s clear, the most powerful being in the universe is Thanos and Thanos always wins.

Quickly you see that the tone of the book remains the same even with a new writer. We’re not given a Thanos with a difference in personality. We are actually 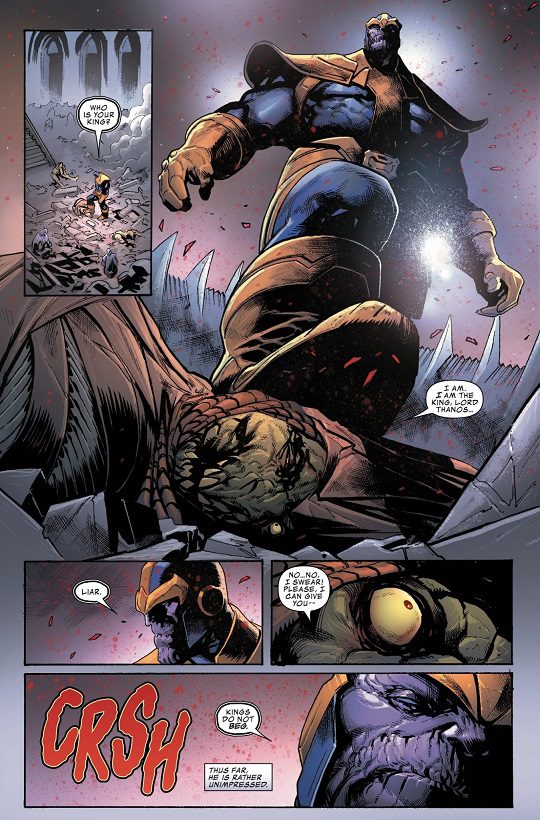 given a Thanos that is clearly finding his way back up the ladder so that he will be feared all across the universe once again. When you see him take control of the Chitauri and claim them as his new army. You see the satisfaction in his face. One of my favorite things about Thanos is how he is a being that is all about the destruction, control, and conquest. We aren’t told what he is doing is right. We don’t see him waver from one side to another. We literally see him soaking himself in a rain of blood and he doesn’t look like he could be any happier. We have plenty of villains who are seen as one-dimensional just because they yell about conquest and power.

What I believe helps separate Thanos apart from the others is how much he enjoys doing it. Without his own army and minions, we see he fights for power because it’s what he loves and he doesn’t care who gets in his way. He doesn’t think twice if he wants to kill someone, he does it and moves on to the next. One big surprise for me in this issue was seeing a Ghost Rider. This is not Robbie Reyes, in fact I don’t even know who this one is exactly but I love his attitude. Being left off with these two together as he gets brought to meet someone leaves with much excitement about where we will see Thanos go in the near future.

Continuing its tone, characterization, and journey for Thanos to reclaim who he once was. There is no need to worry about Donny Cates as he is clearly the right man to keep paving this road for Thanos to become great again.