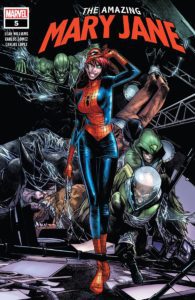 Mary Jane Watson has had quite the sorted journey throughout her life. Whether she is an actress, girlfriend, or daughter, the actions she’s taken has brought her to where she’s at now. She’s finally made it out to Hollywood and starring in a movie that happens to be a biopic about one of Spider-Man’s foes. Additionally, the director IS the foe! Looks like MJ has gotten into quite an interesting situation.

This issue of the Amazing Mary Jane brings us into the final day of the shooting of Down in Flames, Up in Smoke. We see MJ’s last day on the set comes with some news that amazes many on the crew including director Cage McKnight (Mysterio). It just required the shooting of one last, final scene. Although, things don’t always go as planned. 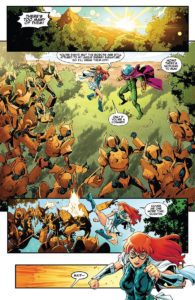 Overall, Amazing Mary Jane #5 brought together a good plot and some excitement in the end. The artwork was very bright, especially in the facial features of most of the characters. Unlike something grittier like Wolverine, the tone of the art and story were light and effervescent but didn’t overdo it. The whole issue was a light indulgence and interesting view on more of MJ and her life.