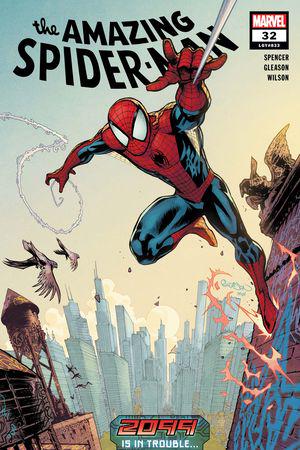 Nick Spencer’s The Amazing Spider-man moves on from the storylines of the Absolute Carnage crossover and starts fresh with a new story arc and a new lead artist. Patrick Gleason, formerly of DC, draws his first full issue in Amazing Spider-man #32. The story sets up a number of questions that lead to the 2099 crossover event next month while providing enough exposition and action to propel readers quickly through the book. Issue #32 is a great launching point for this new arc and for any new or returning readers.

Spencer densely packs Peter Parker’s inter dialogue with recent events to allow any reader checking out Gleason’s art to easily catch up and be carried along for the ride. Since taking over for Dan Slott, Spencer has continued to write a mature yet down to earth Peter Parker. The character dialogue between Peter and his fellow scientists mixes Parker’s intelligence with his lack of confidence and comes off as genuine. Peter’s newly discovered sister is thrown into the mix as the action ramps up, but knowledge of her backstory is not required to follow the narrative. The action between the Parkers, Chameleon and the Foreigner heats up and Gleason’s art captures the action and the characters well.

Patrick Gleason’s artwork is a standout, capturing iconic poses of the characters and emotional expressions on their human faces. Ryan Ottley’s art from the previous issue worked well for Carnage and Venom nostalgia and hearkened back to Sal Buscema’s art from the 1980’s and `90s Spectacular Spider-man. But Gleason’s work brings a fresh take and new life to the characters. Gleason created wonderful imagery for Superman and his son Jonathan in recent years, and fans of both his work and Spider-man’s characters should be excited to see how Gleason breathes life into Spider-man’s world.

Gleason’s art is complemented by the excellent colors of Matthew Wilson, providing an atmosphere to the night scenes and creating a sense of foreboding around the pages for Spider-man 2099. Gleason’s heavy use of black, blue, and yellow in those panels matches the color pallet of the original Spider-man 2099 series. This tone creates a perfect set-up for the pending 2099 crossover.

As a nice nod to those older series, Spencer uses the Foreigner, who came from the pages of Spectacular Spider-man, and brings back an old acquaintance of his as well. While it is difficult to know how many of the Foreigner story threads will carry over into the coming 2099 arc, Spencer has continually seeded his run with both immediate and long term story hints and payoffs.

Amazing Spider-man #32 provides a solid foundation for this new story arc and the creative team. Readers who may have fallen off during Absolute Carnage owe it to themselves to return for this new arc. Spencer, Gleason, and Wilson’s work beautifully realizes both Parker and Spider-man’s world and tease readers with enough questions to come back for more.

2099 Marvel spider-Man
Add your voice!Join the conversation on Discord...
Join Our Discord