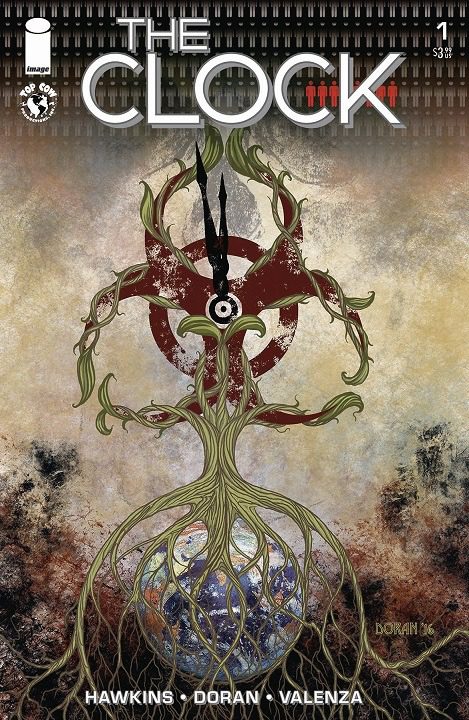 Matt Hawkins’ The Clock is a confident, thoughtful, and intriguing title that knows exactly the story it wants to tell. The first issue creates enough questions and raises big ideas to capture readers. And while the issue contains more setup than may be needed, the references and introductions may be valuable as the story progresses. In spite of a slow start, the larger ideas presented give readers reasons to return.

Hawkins central idea, an accelerated cancer that is resistant to treatments and claims anyone who is genetically predisposed to all varieties of cancer, creates questions for how governments and cultures would respond. The added hints that it may be an intentional or targeted virus create an additional layer of mystery. The exponential population growth and the global problems that it creates are explicitly tied to the story both by the main character, Jack, who has studied this cancer and by the population clock shown at the end of the issue. The global impact of the disease appears to be the focus of the issue, but the mystery of targeted cancer provides another storytelling avenue for Hawkins to explore. Hawkins even spends time at the end of the issue providing some science behind the basis of the story. His “Science Class” section grounds the concept in the real world and provides sufficient weight to the idea of a viral cancer. His “Science Class” documentation also provides a window into the larger story Hawkins has planned and the questions it could raise for readers.

Hawkins’ use of science to raise larger ethical and social issues is not new. His series recent series of Wildfire and Stairway wrestle with concepts of DNA and biology using science and imagination to construct situations that provide a thought provoking venue for readers. Hawkins’ experience writing traditional super hero comics like the rebooted CyberForce demonstrate his ability to juggle a cast of characters and maintain a narrative focus. The narrative focus here is yet to be completely revealed as this first issue introduces both characters and concepts. Hawkins may be keeping the full narrative close to the vest initially, but it is clear he knows where he is going.

Colleen Doran’s grounded artwork helps the title create human connections with the scientist Jack, his family, and the people his work could save. Her artwork provides a sense of place for the Nigerian refugee camp and captures raw emotion of the Congressional hearing for the cancer.

If The Clock was a new show on a streaming service, social media would be buzzing with the concepts that it wrestles with. Thankfully, Hawkins’ story works in a variety of mediums and comic book are no exception. Viral cancer and overpopulation are a rich storytelling framework for the creative team to draw the readers in and allow them to confront difficult social and scientific concepts.