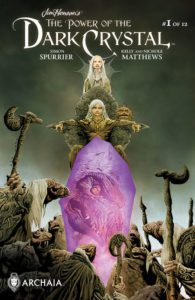 Jim Henson’s The Power of The Dark Crystal #1
Archaia

Jim Henson’s The Power of the Dark Crystal by Boom! Studios honors and respects the original while propelling the world meaningfully forward. Issue #1 is an engaging start to a 12 issue limited based on an un-produced screenplay of a sequel to the original film. Screen writers Craig Pearce, Annette Duffy, and David Odell are credited right from the start with crafting the screenplay. Unfortunately for fans, a feature film never got off the ground. Fortunately for everyone, Boom! Studios collaborations with other Jim Henson licenses (The Muppets in the late 2000s, and recently under the Archaia brand Fraggle Rock, Labyrinth, and The Storyteller). The Power of the Dark Crystal is as official as it gets for the franchise and the creative team of Simon Spurrier and Kelly and Nicole Matthews careful craft a first issue worth the 35 year wait.

British writer Simon Spurrier recently wrote the Eisner Nominee The Spire where he create a rich and living world filled with various creatures and layered in history. Spurrier also wrote on a few of Marvel’s X-men titles and any good mutant writer often finds ways to balance a complex mythology with a new narrative hook. This pedigree makes Spurrier an excellent choice for expanding the unique world of the Dark Crystal. The Matthews artistic team illustrate a lush, warm world that reflects the 100 years of peace since the darkness of the movie’s setting. The artwork is truly artwork. The colors and tones fit this peaceful fantasy world that has grown cold and complacent. 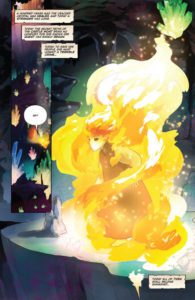 The stars of the 1982 movie, Gelfings Jen and Kira, are now old and appear as stoic, detached rulers. A new character and potentially main charter, Thurma enters the tale. Thurma is from a world within the planet of the movie, Thra. The world of Thurma is dying and only a shard from the crystal can save it. Before this plot is revealed , the first issue spends time allowing readers to explore the world and to become attached to the character of Thurma. Delaying this reveal creates a number of opportunities for readers to identify with Thurma’s character and grow concerned for the survival of the world of Thra.

The storytelling and artwork create an engaging and well crafted start to a wider narrative that fantasy readers not familiar with the original franchise will enjoy. Fans of the original may realize that breaking the crystal could have a world shattering impact. The plot of the 1982 movie was that Jen unified the crystal and removed the evil from the world. Breaking the crystal to save one world may doom another.

This is an essential read for fans of the franchise and for any fantasy fan. Even readers not connected with the franchise will find themselves pulled into this world and wondering what comes next. The setup of the first issue promises a world changing tale of adventure, sacrifice, and hopefully renewal.