The Cure an All-Star Batman #7 REVIEW 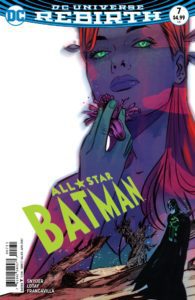 All-Star Batman #7 pivots hard away from what we saw in the first issues of 2017 when Batman and Freeze dueled in the arctic. This time around the setting and villain are both drastically different, as is the artist. That makes three different artists in the past three issues, a trend that is meant to continue into the near future, too. I left issue #6 a bit confused as to how it ended, and somehow, despite moving to an entirely new locale, this follow-up manages to make those events clearer. All the while, it stands on its own as another solid release from Snyder and his revolving door of artists.

Batman abandons Victor Fries and heads for a much warmer climate acting as the current home of Pamela Isley — or Poison Ivy, of course. The story that unfolds here is convoluted at first, so much so that I had resigned myself to the idea that it was deliberately dizzying and would continue to be until some grand finale issues and months away. But it all gives way to a much clearer narrative that serves to explain what’s going on in this arc much sooner than that. Still not all the pieces are in place, but Snyder clearly isn’t wanting that to be the case, and it works better this time than it did last month. 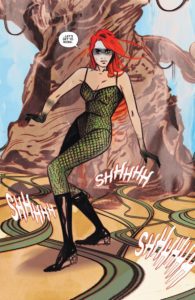 The art from Lisa Wood aka “Tula Lotay” (The Wild Storm, Shade, The Changing Girl) is magnificent. I don’t know if it’s DC’s or Snyder’s call to bring in specific artists, or maybe it’s a combination of the two, but someone is hitting it out of the park with this series. I shouldn’t be surprised, I guess, after Greg Capullo delivered some of the best Batman work ever alongside Snyder over the past several years. The DCCU is, of course, huge and displays varying degrees of quality, but to date I’ve never been disappointed with a Snyder Batman issue or arc.

Tulay’s art is at once retro and ultra-stimulating. Characters, especially Ivy’s new look, are reminiscent of a bygone comics era, but the color palette imbues each panel with the right trippy factor you want from the mesmerizing seductress. Like Freeze before her, Ivy is a borderline anti-hero at times, or at least she’s a villain whose motivations can be understood. Snyder plays that well here.

I don’t often mention the Duke-centric stuff in the back third of each issue of All-Star, but not out of disinterest. For the Duke fans, this month’s issue is one of the best. As a fairly young comic reader it’s been a lot of fun watching the rise of a new sidekick after so many others have been well established by the time I got to reading the medium. Overall, whether you were left impressed with last week’s introduction to the second arc, or, like me, just confused, this week’s follow-up is a worthwhile and aesthetically intriguing step in the right direction.