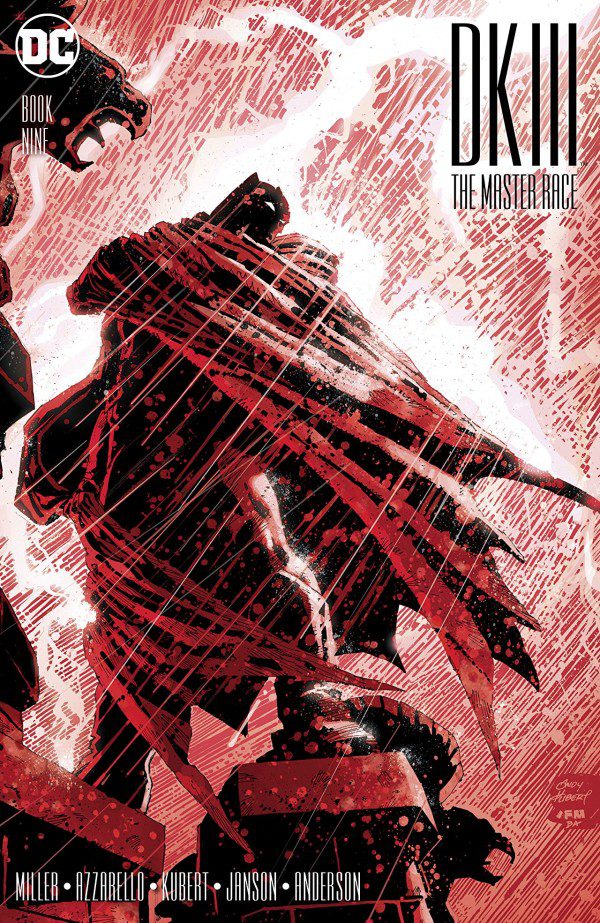 So, here we are, finally arrived at the final issue of The Dark Knight III: The Master Race.

Few comics have such a special regard, an almost reverential air reserved for them like Frank Miller’s Dark Knight comics do. After the ambitious, yet hugely flawed and difficult Dark Knight sequel let fans feeling wounded and lamenting Miller’s heyday, DC very wisely brought in a co-writer in the very able form of Brian Azzarello. Few writers are as well suited to Miller’s hard-boiled, noir style of comic book writing and his collaboration has brought a focus to Miller’s storytelling.

Yet has such clarity ended up damaging the story in the long run?

This final issue does a fine job of wrapping up all the previous threads of the series (besides what the hell happened with Lanterns altercation with the three Kryptonian ‘sisters’). Unfortunately, the resolved threads feel nowhere near as interesting as where they were when we started. The entire series started off feeling like it might be monumental, yet found its natural level at being an entertaining, if not overly long good yarn. Sure, there were some great moments, chief among them being the Amazon’s confrontation with the Kryptonians, but all in all, it felt like more page length that the plot justified. The Dark Knight Returns presented a dark and idiosyncratic world for Bats to play in; The Dark Knight Strikes Again amped up the weirdness and crazed energy, whereas the Master Race just feels a little… ordinary.

Throughout, there was very little to differentiate this iteration of Batman, Supes, et al. from the mainstream versions of the characters. This final issue is no exception which, by issues end, has returned nearly every character to a state of normalcy which almost makes the previous two series redundant. The warped, political nightmare which cocooned the first two outings of the Dark Knight seem to have simply resolved themselves and disappeared in the telling of a straight ahead, action comic. For all its failings, the Dark Knight Strikes Back was nothing if not ambitious. The only ambition in the Master Race seemed to be making some serious cash and moving Miller’s Dark Knight into the mainstream. As with DC’s recent integration of the Watchmen into the main universe, the Master Race feels like a follow-up exercise of inclusion. The Batman we are left with at issues end is a far more palatable, kinder Bats and we are all the poorer for it. 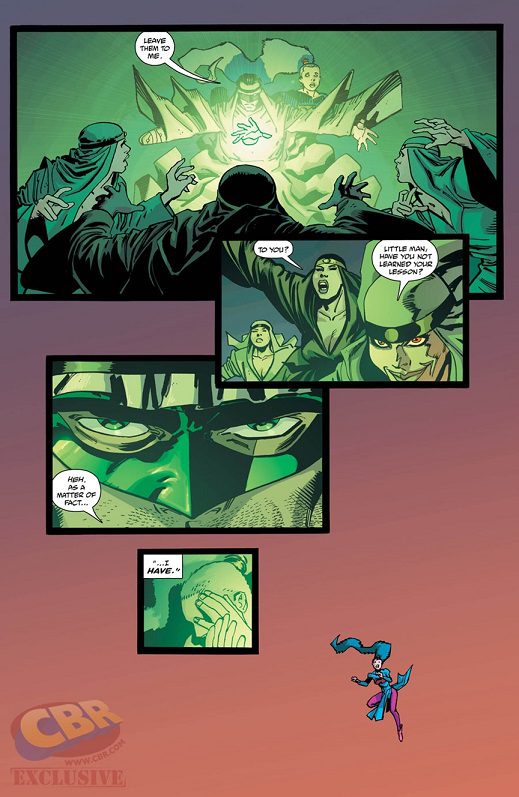 Regarding the plot, there is a definite feeling of let down regarding the final conflict between the main players and the Kryptonian army. The use of bats to defeat an army of Supermen was never going to work on any level and it reflects a rushed feel to the whole issue. Green Lantern and his magical floating hand remain incredibly goofy, whereas every other hero seems returned to a shining, heroic stature which seems very un-Miller-like.

The art remains solid and if you’ve always loved Andy Kubert and Klaus Janson’s art, you won’t be disappointed here. Miller’s art and writing on the final footnote story at the end is strangely warm and affecting, almost conferring a blessing onto his characters, anointing them all with, the shock of Frank Miller shocks, a happy ending. With much rumor doing the rounds regarding Miller’s ailing appearance and health, it is hard not to feel that this is a final farewell to his own legendary versions of these characters. If true, then a creator allowing himself some sentimentality in his farewell is understandable.

Although there is a sense that the series could have been so much more, it is what it is; a solid, overly long but sometimes hugely entertaining comic book. This issue embodies all of those elements and with the ending feeling so complete, almost removes any possible interest or possibility in any further sequels. Without Miller’s mad vision in full effect, perhaps this is for the best.

Long may the Dark Knight rest in peace.