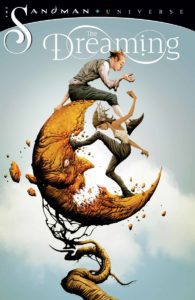 After the events of Dark Knights: Metal, Daniel, the current master of The Dreaming, has disappeared. Left to clean up his mess is Lucien, librarian of The Dream’s castle. With the help of Matthew, a talking Raven who is the companion to the Dream, and Mervyn Pumpkinhead, a vulgar janitor/caretaker pumpkin-headed man at the castle, Lucien must cope with the fact that he is now Master of The Dreaming. While the three of them are trying to solve other problems, such as the faceless figures that begin popping up all over the place another problem shows up: Dora the Monstress, a young woman living in a tree surrounded by the gifts she’s brought while sleeping a dreamless sleep. She begins causing havoc, hopping into other realms and dreams, stirring up trouble as she goes.

After Dora brings Balam, the Duke of Hell, into The Dreaming, Lucien overcomes his worry about the future of the realm and poses as Daniel to ward off Balam. When it works, it’s just as much of a surprise to Lucien as it is to Mervyn when he finds out Daniel really hasn’t returned after Lucien told him he would search for Daniel. Dora then reveals to who she thinks is Daniel that she still has an issue with him for a reason we know not…yet. Lucien then enlists Mervyn to train and care for the faceless figures as a way to stop them from being a problem in the future.

This issue felt more like a direct continuation of Neil Gaiman’s Sandman run, which doesn’t leave a lot of room for new readers to jump on, which is fairly disappointing as a new reader myself. But with the slow pace and detailed world-building in the first issue, new readers should be able to catch on if they care enough to. Si Spurrier’s dialogue and narration are what I will live and die by, for it fits every character perfectly. Dora’s sometimes raunchy and many times angry tone matched what I think will be the direction of the character for a long time to come. Lucien’s often timid but intelligent frame of mind was easily one of the best parts of the issue, setting up what will be a great character arc. Mervyn and Matthew were both fun characters that will hopefully play an important role since they were such enjoyable characters to read.

Bliquis Evely’s art is some of the best in a long time, a completely different yet equally amazing style that’s along the lines of greats such as Jason Fabok and Gary Frank. Such a whimsical way of drawing, Evely’s drawings managed to grasp the context of the book so well, it’s hard not to just stare at one panel for hours.

Matt Lopes’s colors make the art feel almost like a watercolor painting, just so irresistible to look at.

Simon Bowland’s lettering of Matthew Raven’s dialogue was so reminiscent of a bird’s squawking that it was eerie.

The Dreaming #1 is a fun read that sets up tons of interesting stories to come but isn’t very friendly to new readers, although Evely’s art makes that almost completely irrelevant due to how transfixing it can be.

review sandman The Dreaming Vertigo
Add your voice!Join the conversation on Discord...
Join Our Discord