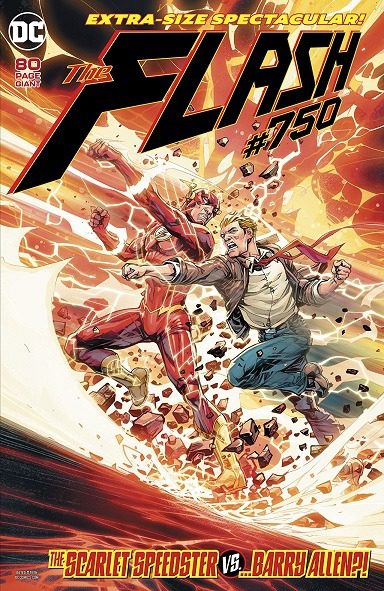 A series of stories celebrates the legacy of the Flash including his past, present and future.

The Flash Age features the Scarlet Speedster moving ahead with his relationship with Iris. In the wake of the last arc, Barry is taking some time to re-establish his life as both the Flash and as a CSI. While Barry works on a stolen jewelry case, Iris works on a story of her own. One that will bring together people who have been touched by the Flash and his acts of heroism. The unfortunate arrival of Godspeed signals the introduction of a new and deadly threat to Flash and all speedsters. A great introduction to a new arc with a villain that is interesting. The return of Godspeed feels natural and the story moves at a great pace.

Have you seen this:
Hulk, Black Panther, Gunslinger Spawn AND MORE: THE GWW PULL LIST

In Beer Run, Captain Cold is trying to keep a low profile in his hideout in Keystone City. As his beer supply runs low, the Rogue decides to hit the local store where he runs into an armed robber. After taking out the kid, he attempts to leave only to be surrounded by police looking to take him down. A fun, well-paced short that did exactly what it set out to do.

Why You? tells the story of a simple date between Barry and Iris that turns into a lesson in introspection as the question of why he has to be the Flash forces Barry to slow down a moment and run through a series of scenarios that would have others take on the mantle and what kind of world they would defend. A fine short that showcases the power of the character as well as the legacy of the mantle itself.

Flash of All Worlds finds Flash taking on Mirror Master as the villain subjects the hero to twisted mirror versions of himself. The story was fine and the pace was perfect for its length. Riley Rossmo’s art was a little jarring with the elongated strides and angles, but the art does vibe with the motion of the story.

In At The Starting Line, Joshua Williamson tells a story showcasing the heroism and indomitable spirit of Jay Garrick. Jay’s unwavering hope and optimism are brought to bear in his fight against The Thinker and his battle will reveal someone planting seeds of doubt in the speedster’s ear.

The final story is a Flash Forward epilogue that will find Wally West in the Mobius Chair witnessing every crisis and event in the DC Universe unfold before him. As he sees the past and present laid out, he can see where things have changed and converged. This prompts him to find Tempus Fuginaut to begin a mission to set things right. A great epilogue to a story that touches on both the legacy of the Flash as a character, but also the character’s role in the larger universe.