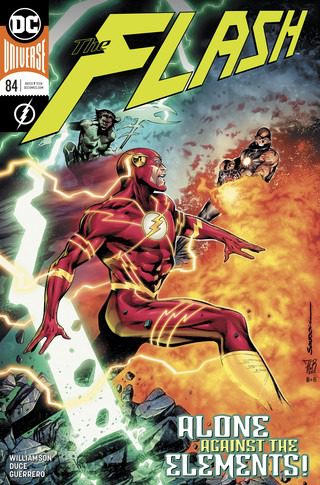 The Flash family will have to team with rogue members of the Rogues if they have any chance of defeating King Cold.

With Captain Cold in control of Central City and the Flash family unable to use the speed force, everything is looking up for the leader of the Rogues. Unfortunately, there is dissension in the ranks in the form of Cold’s sister Golden Glider and she’s teamed up with Flash and the others to stop her brother before Lex Luthor brings on the end of the world. In order to get what they need to stop him, they are going to need the help of another rogue, Weather Wizard.

Realizing that there is an issue with the Speed Force, Weather Wizard offers to help Flash and the others fix their issue. Unfortunately, this means bringing another rogue into the mix.

This was an enjoyable issue. There are some great character moments and Joshua Williamson knows these characters and how to write them effectively. While I still have issues with this particular story arc, Williamson effectively moves the story forward while adding some new and interesting wrinkles to Flash’s journey. It will be interesting to see where the story goes next and how Flash will come back given the odds against him.

Christian Duce offers some great visuals in this issue. The characters look great and there are some great moments featuring Glider, Weather Wizard and the Flash. I like the way Duce frames a scene and the action was well done.

DC comics The Flash
Are you an Insider?News, reviews, & updates are just the beginning.