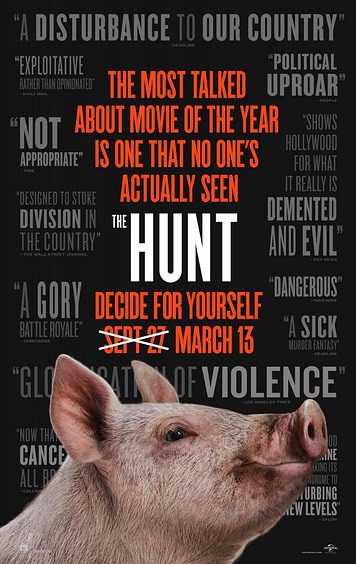 Banal Joke #3: “Those clowns in Congress did it again! What a bunch of clowns!”

The DJ 3000 is one of the best gags from the classic Simpsons episode “Bart Gets an Elephant.” If that machine collaborated with the bulky, violent, and incompetent ED-209 robot from RoboCop to write a screenplay, then the result would probably look something like The Hunt.

It is a film that speaks loudly but has absolutely nothing to say. The premise, about a game preserve where rich white liberals hunt down “deplorables,” is a decent enough premise for satire. Where it falls apart is in its massively incompetent execution.

Have you seen this:
11 Shocking Moments From WWE Elimination Chamber 2021

While the film pokes fun at the wealthy leftists at its center, it doesn’t treat their prey much better. The Hunted, as they are, are almost all uniformly ignorant, racist idiots. They are given barely more than the absolute necessary characterization before they are shot, sliced, blown up, or impaled by the leftists hunting them. While the shots of violence are glorious, it feels that they were where the majority of The Hunt’s creative energy went.

The only character who actually feels like a character is “Snowball,” and that’s mainly due Betty Gilpin’s performance. Snowball states no political preference. Just that she is trying to survive. Otherwise, the film is filled to the brim with every caricature to crawl from a political cartoon from The Onion.

Where the film doesn’t rely on the aforementioned stereotype, it relies on eye-rolling, one-note humor. “Crisis actors,” “PC culture,” Sean Hannity and NPR, and the “Deep State” are all given shout-outs that are meant to make us laugh. We instead groan.

Have you seen this:
MUPPETS HAUNTED MANSION (REVIEW)

But the film’s true triumph of incompetence comes in its ending. A twist ending so incompetent and baffling that it cannot be described here. The Hunt’s makers obviously believe that they are making some sort of grand angry statement that flips off both sides of the political spectrum. Instead, it comes off as an unhinged rant that completely undermines its previous 90 minutes. The explanation for the creation of the Hunt is something so politically muddled that it renders the film’s message completely incoherent.

It’s true that the times we live in are as divisive as ever. On that end, we should be thankful that a film like The Hunt exists. In trying to mock “both sides,” it may wind up uniting them instead. Progressives who see it will be embarrassed, and conservatives who see it will be bored. Together, they can summon the bipartisan strength necessary to demand a full refund.

The Hunt
Did you miss breaking news?We publish new content every day.