“Great revelations of nature, of course, never fail to impress in one way or another[…] Mountains overawe and oceans terrify, while the mystery of great forests exercises a spell peculiarly its own. But all these, at one point or another, somewhere link on intimately with human life and human experience.”
-Algernon Blackwood, “The Willows”

Algernon Blackwood, a horror writer cited as an inspiration for H.P. Lovecraft, wrote frequently on the terrible and beautiful forces of nature. And it’s something that Robert Eggers has previously explored in his 2015 film, The Witch. In that film, the mystery of its great forest is dark and sinister, with a palpable malevolent force lurking in its tree branches.

And the horror of the oceans is what finds Robert Pattinson and Willem Dafoe in the beautiful, strange, hilarious, and terrifying new film from Robert Eggers, The Lighthouse.

At its most basic, The Lighthouse is the story of two men: Winslow (Pattinson) and Wake (Dafoe), and their struggles to keep a lighthouse functioning as a storm hits them. But as they clench their teeth and attempt to push through the awful storm, truths about the men begin to claw their way to the surface.

On every level, The Lighthouse is a film designed to unnerve. The mood and tone shifts of both characters and scenes are as violent and swift as the storm that plagues the lighthouse. A moment that may feel sinister may surprisingly shift to comedy, while enchanting scenes of beauty slowly give way to horror. And this tense atmosphere is not helped by the crashing sound effects and thundering score. The greatest impact, however, is in the performances. Winslow and Wake are men at different points in their lives, with different goals, different experiences, and, most importantly, different expectations of their fellow man. When these differences clash and pile on one after the other, the grandiosity of the film becomes truly apparent.

It’s Pattinson and Dafoe who truly make The Lighthouse a theatrical endeavor. They imbue their characters with anger and compassion, with violence and grievance, and with voices that range from intimate whispering to boastful oaths. The experience that Eggers channels through these characters is something that can only fully be felt on the big screen.

And experiencing The Lighthouse is to experience a whole mess of contradictions in tone. It’s a grand-scale horror film set entirely in one location, a movie about how one’s thunderous desire for eternal vengeance can be induced by another’s lack of manners, and how a driving force in madness could even be a cohort loudly farting too often.

Madness is something that is felt not just in the characters, but in the setting itself. The volatility of the sea is felt and heard in every frame, a land that can by alternate turns be beautiful but ruthless. The black-and-white cinematography, filmed in a condensed ratio, highlights both. At once, we feel the overwhelming claustrophobia of the lighthouse, and the power of the sea offscreen. If there is one thing to be gleaned from The Lighthouse, it’s the utter futility of man’s endeavor to control or even understand nature. In this case, the endeavor is something that reveals less the nature of the world and more the nature of man. And what it reveals is something none too pleasing to the eye or mind.

This year has proven to be another banner year for horror. Earlier releases such as Midsommar and Us have proven themselves to be works concerned with more than just scares, but with exploring what makes us human. With The Lighthouse, Robert Eggers created a film that is the most thematically rich of them all. 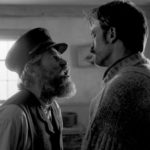 Sony’s ‘Spider-Man: Into the Spider-Verse’ Sequel Will ...