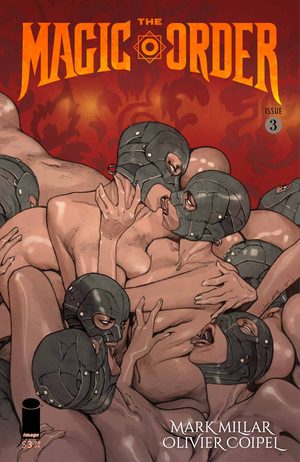 Regan and Cordelia shake down any lowlife they can find to learn more about Albany’s assassin, while their father makes another attempt to bring Gabriel back into the fold. The former magician who is suffering from guilt from a tragedy he blames himself for.

Mark Millar and Olivier Coipel have accomplished making a comic book feel cinematic without having to remove what makes the medium so special. It’s not difficult to see the difference between a comic and a movie pitch. The artwork leans heavily on wide shots, and the book as a whole feels more streamlined and cookie cutter because the creator is making it accessible to a studio executive. The Magic Order really tows that line brilliantly.

Gabriel and Albany’s motivations were put under a spotlight in this issue, which perfectly sets up what’s to come. We were finally given a glimpse of the events that lead to Gabriel’s daughter death. A death that understandably, he feels much guilt over, especially given how much the scene resembled many tragedies in the real world that occur when children find their parent’s gun. It’s no wonder he has turned away from magic. Albany’s reasons for doing what she does isn’t quite as strong, but the chaos she brings is riveting nonetheless. As we previously found out, she is lashing because of her father for not entrusting her with the spellbook, Orichalcum. So, of course, murdering and burning down everything her father held dear to obtain the book in order to prove him wrong, is the best course of action.

The stage has been set for a battle between a father who hurt his daughter, and a daughter who was slighted by her father. I’m sure that won’t be brought up in the future or anything. The story has taken a strong turn in this issue and the series has made the right move to let the characters shine by letting them take precedence over the fantasy aspects.

It took me three issues to truly appreciate how well designed everyone is in this series. Olivier Coipel is a master at what he does, and he has made such recognizable characters. Not to bring back the talk of the inevitable Netflix movie or series, but Albany and her mysterious assassin will pop on screen. They look amazing on the page but have a unique and easily adaptable look. The death in the issue was graphic and brutal, and colorist Dave Stewart really sets a moody tone. One small note I’d like to make, the fuzzy-blurred look that was used to make shadows was really effective. Leading up to the “battle” toward the end of the issue, it was pretty noticeable, but then we get that nice creepy semi-reveal. I thought it was fantastic.

The Magic Order is seedy and twisted take on the fantasy genre that was sorely needed. Albany’s story itself is the perfect metaphor for how Mark Millar is tearing down the uniformity we see in most stories revolving around magic. Issue #3 was everything it needed to be and has seemingly raised the stakes at the right time. I’d really like Albany to have a bit more complexity to her, but there isn’t much to complain about. I just want to sit back and enjoy the show.