The Mighty Thor: At The Gates of Valhalla Review 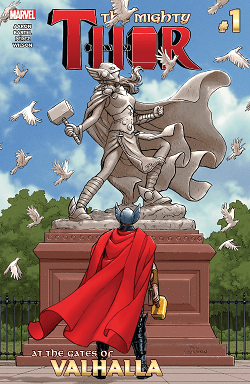 THE MIGHTY THOR: AT THE GATES OF VALHALLA
Marvel Comics

There really is nothing like reading a comic book drawn by one of your favorite artists who brings your favorite character to life. It’s kind of surprising that Jen Bartel hasn’t been brought into Mighty Thor before this, but having her stunningly versatile art style for this issue feels just right. This book is a coda to Jane’s story in which we spend the first half of the issue in the very, very far-flung future with the granddaughters of Thor Odinson. The three Goddess of Thunder travels back in time across ‘the Golden Age of Thor’ to find their favorite Thor. They run into just about every other Thor and almost give up… and then they find her.

I mean, it’s probably obvious who their favorite–and mine–is, and let’s just say, it’s nice having something in common with the boisterously awesome granddaughters of the All-Father Thor. It’s so good to see these characters as a framing device once more; they are a delight as always. Reading this made me wish they’d get their own mini-series or something because they are so much fun.

I always associate Jen Bartel with a kind of peacock-neon stylized version of Eighties illustration, but that’s only vaguely hinted at here. The colors and art style are more natural and true to life, but there’s still a hint of air-brush style Heavy Metal (as in the magazine/movie) in the story. It’s so perfect for this story–the best parts of Thor: Ragnarok‘s style with a hint of a cool bi-friendly epic-girlie illustration for which I love Bartel.

This provides a nice contrast between the various settings, including the last visit the young warrior goddesses make. Just like Russel Dautermann before her, the Mighty Thor requires the artist to portray the epic and the mundane, and Bartel pulls it off beautifully.

Speaking of contrast, Ramon Perez handles the art for the other half of this issue, concerning one of the best villains Marvel has–Malekith. Jason Aaron has a habit of finding characters underutilized by the MCU and giving them the characterization they deserve, and Malekith is no exception. He’s so unashamedly, unabashedly cruel and evil, it’s almost admirable. Almost. His reintroduction is, uh, deliciously brutal, and he enjoys every moment. Good Lord.

We are provided with a quick catch-up of Malekith slowly worming his way into the various realms and either killing his opposition or manipulating anyone who had a minor grudge against Asgard. Since the last few issues have been very emotionally wrought and primarily focused on the fight with the Mangog, it’s easy to forget we haven’t seen him or Dario Agger for a while. It’s pretty clear the focus of this issue is to bring the War of the Realms crashing back into our lives. There’s no let-up, not even for Jane. We’re reminded that this brutal and chaotic war is still rumbling in the background, and soon enough Earth will also be caught up in it.

The earthier, more strangely viscous style of Perez is a great contrast to Bartel’s more airbrushed art; his depiction of Malekith is appropriately pointy and almost Joker-esque. It’s a shame we won’t be seeing more of him or Bartel, but this issue is a stop-gap, a brief breather before the next chapter, which promises to be face-meltingly epic.