The Odd Couple in The Walking Dead 164 Review

We got two The Walking Dead issues this month! And both are great. The walkers have breached the walls of Alexandria, and the townspeople are fighting for their lives. This issue flows directly from last issue, which was filled with intensity and shock. Here, Robert Kirkman slows down the pacing a bit as Eugene, Heath, Andrea, Dwight, Michonne, and Jesus strategize to divert the horde. We get to see Maggie’s, Carl’s, and Lydia’s reactions to the overtaking of Alexandria as they look on at the Hilltop. Kirkman continues to thread the theme of trust in this issue, as was evident in issue 163. It seems like Rick is starting to trust Negan, but should we?

Unlike in issue 163, the characters get some time to breathe as they seek safety inside people’s homes. The best part of the issue is the conversation between Rick and Negan—the odd couple. Negan continues to try to prove to Rick that he’s trustworthy. In this issue, he 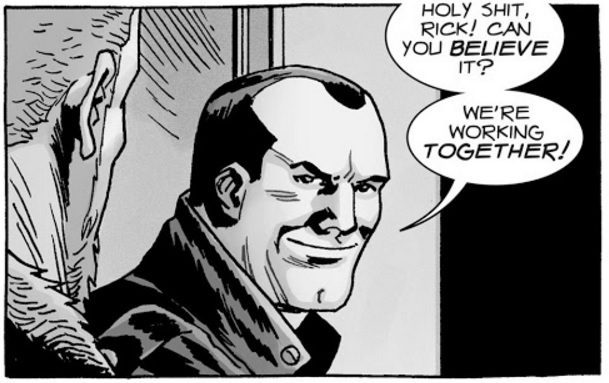 protects Rick and saves his life yet again. Although Negan is a master manipulator, I’m starting to come around to trusting him, as he reveals some more about himself. He tells Rick that he was surrounded by people who were scared, who cowered in fear and got themselves killed. He says, “After a while. I just started seeing everyone like that. . . . I just lost respect for the human race. Makes it really easy to bash a man’s brains in when you think it might save all his friends . . . especially when you think the only way his friends can be tricked into living is if they’re made into slaves.” But Rick isn’t scared. He doesn’t have the same fear as others that Negan has encountered. Because of this, Negan has regained hope. He respects Rick. (Either that or Negan is running a long con.) Kirkman is an expert at making readers feel an uneasiness and tension in regard to characters relationships with each other. Negan is certainly a loved character, but it’s taken over sixty issues for us to start coming around to trusting him, which is expert writing on Kirkman’s part. After all Negan has done, it would’ve been ridiculous had he tried to get us to trust him in just a few issues. 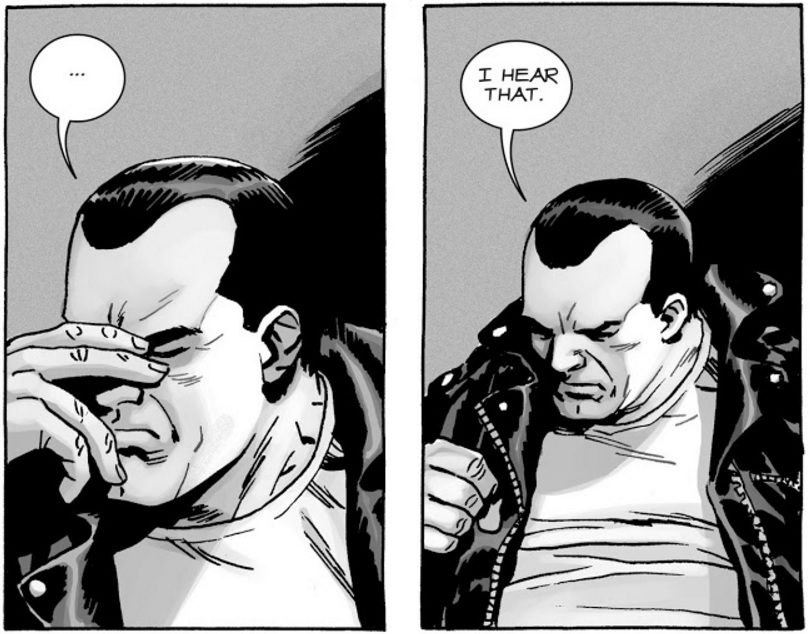 Charlie Adlard’s artwork remains consistent, including a variety of close up, landscape, mid-range black-and-white shots. I particularly like the pages with Negan, and how ashamed he looks when he tells Rick about his wife. You can feel the struggle and sadness as Negan conveys his story. It’s interesting—and almost a bit funny—that Rick’s emotionless expression remains the same as he listens. He’s feeling just as conflicted as readers, and that shows perfectly in Adlard’s art.

Adlard’s cover of Maggie, Carl, and Herschel looking out over the land is interesting. It’s peaceful with the sun setting in the background; however, we know that the land below is filled chaos. Again, this symbolizes ambivalence, which the characters must always be feeling. The world is filled with death—and the walking dead—however, there is still beauty to be found. As the light fades away and the day slips into night, does this symbolize hope also fading? As the sun sets, time continues to pass, and there are fewer chances to lead away the sea of walkers from Alexandria and the Hilltop.

This arc continues to stay strong, as the characters deal with the massive zombie horde. Although the pacing is a bit slower in this issue, Kirkman’s writing does not disappoint. I’m interested to see what happens with the radio—as Siddiq found it in Eugene’s house this issue. I think there’s still a chance for the group to head to Ohio. Especially since the Saviors are planning to swoop in and “clean up what’s left.” I’m looking forward to issue 165!