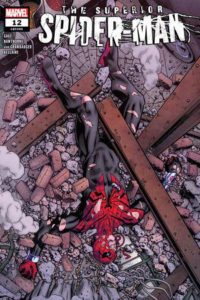 Dr. Otto Octavius became Elliot Tolliver, a brilliant scientist and masked hero the Superior Spider-man, during the close of Dan Slott’s run on The Amazing Spider-man. Elliot Tolliver became a complex character who wrestled with his ego and an internal drive to help others. The premise of a villain turned hero worked well when Octavius pretended to be Peter Parker, but the concept was even more rewarding when Octavius struggled to figure out who he was as Tolliver.

All of this character building came to a head in issue #11 when Octavius made a deal with Mephisto to erase his memories, and the moral guidance, that came from his time as Peter Parker. This deal worked as both a plot device for Octavius to defeat a multiverse version of Norman Osborn and as a nod to the infamous deal Peter Parker made with Mephisto a decade ago. At the end of issue #11, readers viewed the return of a green and orange clothed Dr. Octopus. The issue left readers unsure if this was the true return of the villain or a clone of some type. Issue #12 makes Dr. Octopus’ return official and reintroduces him into the world. Writer Christos Gage wisely allows Octavius and the reader to struggle with whether his return is as a villain or as a hero.

The strength of this issue lies in the struggle to determine the future for this renewed Dr. Octopus. Gage’s writing has the characters around Octavius challenge his decision to strip away the Parker sense of responsibility. Two of the women that Octavius loved, both as Parker and as Tolliver, make a case for Octavius’ humanity and compassion. While the resolution of the story arc does not see Elliot Tolliver return, the reader is left wondering who Octavius will be going forward. This uncertainly unlocks future storytelling potential for Dr. Octopus across the Marvel universe.

This future potential is needed since this is the final issue of The Superior Spider-man. The reverted former villain may be an easy conceit to reset the status quo, but the creative team leaves no doubt that this experience has changed Octavius. Artists Hawthorne, von Grawbadger, and Bellaire, subtlety depict the internal strife of the character. The posture, facial expressions, and even watery eyes show readers the unspoken internal conflict Octavius wrestles with as a result of being a hero for the last twelve issues.

The Superior Spider-man was a complex and conflicted character throughout this series. And while this concept could have continued on, Gage and the creative team create a satisfying transition for Octavius and the characters in his orbit. Superior Spider-man fans will have a sad goodbye, but any reader with an awareness of Dr. Octopus will enjoy the exploration of this character.