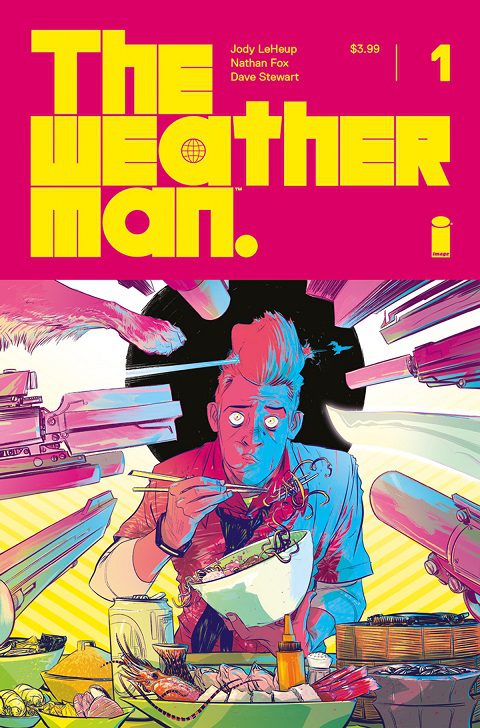 The Weatherman is set on a terraformed Mars in 2770. Seven years after Eighteen billion were killed when the earth was destroyed by an attack of some sort that the president has yet to solve and the survivors are growing impatient. Nathan is an easygoing, semi-lazy weatherman who is actually mainly the comic relief of the news. Making people laugh makes them forget. At least for a while. He has two lovely ladies in his life. Sadie the dog and his beautiful girlfriend Amanda. He has a seemingly normal life, as normal as it can be in 2770 on Mars. He Likes to go on dates and take walks. It takes a crazy interesting turn.

This is one of those comics that at first has me confused, then I think I’ve got it, then I’m thinking, wait, holy sh*t really?!? That’s not a bad thing. This is not the typical post-apocalyptic sci-fi genre story. It hasn’t given a whole lot away quite yet about which direction it’s heading but there are so many options. Nathan is a super likable character. He’s relatable to a lot of people my age and well, probably a lot of people in general. Issue #1 took the time to set up the vibe and characteristics of the world they’re living in, the personalities of the main characters and some amazing visuals. The art is fantastic. The writer and artist sync pretty close to perfect in each panel. Even the dog becomes a main character. She shows so much personality.

There are some tiny clues that there will be a bunch of cool characters coming with abilities. Also a ‘Sword of God’?! I was questioning what the hell was going on with the villains and their motives up until the very end. It’s a twist! The ending was the best and worst part. I mean that in the best and worst way. It’s awesome yet jarring.