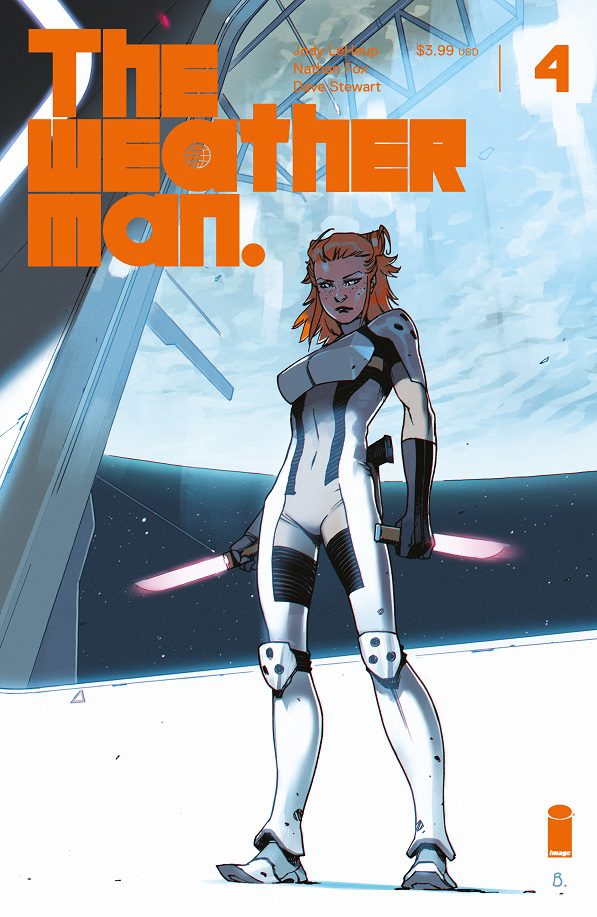 Do you have any idea how frustrating it can be for a creator to toil away behind a desk for years at a time; honing your craft, practicing, pitching, resubmitting, learning and learning and learning some more until you finally have someone take notice of all your efforts and proclaim that you are an “overnight sensation”?

Ladies and gentlemen may I introduce to you the artist Nathan Fox. Nathan is the visual powerhouse behind Image’s series The Weatherman. This is my first exposure to Nathan’s work and boy Howdy! This guy can draw! WOW!

There is so much to like within the confines of the pages of this comic that I’m going to have to break it down piece by piece just to make sure that I get it all packed into one review.

Let’s start with the story. I should take the time right here to mention that Jody Leheup made one hell of an introduction in this issue. The narrative and pacing of this issue grabs you by the sweets and doesn’t let go until the last panel. The dialogue is sharp, the character interaction is playful, edgy, and has the banter of an Aaron Sorkin television show…just without all the walk and talks.

Have you seen this:
Nocterra #6 (REVIEW)

Leheup takes the dystopian future setting and spins the entire concept in a new, yet vaguely familiar direction. The reader can see the influences of movies like Blade Runner, Terminator, and an LSD version of the Fifth Element. As new as I was picking up this series for the first time it didn’t take more than two pages to get me fully invested in the plot and wanting to see what the hell was going to happen next.

Spoilers: I mentioned the film Terminator as being an inspiration for some of the flavor of this comic, there is a scene that happens towards the first half of this issue that will have movie fans flashing to Sara Conner’s nightmare vision of the future in Terminator 2; as a mother watches her child die in front of her in an apocalyptic blast. The only thing missing is the chain link fence from that iconic scene.

Jody sets up the reader in a weird and fun future setting, but it is Fox who comes in like a wrecking ball and knocks the reader out with his incredible artwork.

I’m telling all of our faithful readers. Nathan Fox is going to be a huge deal in the comics industry for as long as he wants to make funny books. There is not one single weakness to the man’s art; from his line work to his facial expressions, to the attention to backgrounds and foregrounds, each and every page is a joy to behold. The sky is the limit for Nathan Fox. I know I’m hyping the hell out of this guy, but this is the kind of talent that you don’t see every day.

The comic is suggested for mature readers for a good reason, there are multiple instances of intense violence, language, and sexual situations. This is not a book that will be for everyone. But for those of us who like action, adventure, and adult situations this is a series that you need to jump on right now.