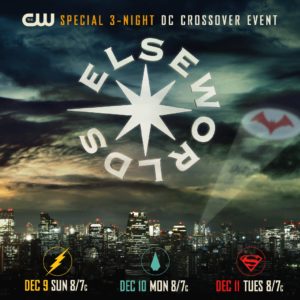 It's OFFICIAL! This year's #DCTV crossover event will be titled "Elseworlds," coming to @CW_TheFlash, @CW_Arrow and @TheCWSupergirl this December! #Elseworlds pic.twitter.com/t31wimGska

This crossover will see the Flash, Green Arrow, and Supergirl travel to Gotham City and team up with Batwoman for an adventure involving Arkham Asylum. Ruby Rose will be portraying Batwoman, who will spinoff into her own show sometime in 2019. Superman and Lois Lane will also be involved in some capacity, with Tyler Hoechlin reprising his role as the Big Blue Boy Scout from ‘Supergirl’ and Elizabeth Tulloch making her debut as Lane in the crossover. Jeremy Davies will be playing Arkham doctor John Deegan, who is reportedly the main villain. It will be Deegan’s actions that draw the three heroes to Gotham. Stephen Amell’s (Green Arrow) wife Cassandra Jean Amell will be playing Nora Fries, wife of Mr. Freeze, during the three-night special event as well.

Have you seen this:
Superman & Lois (Review)