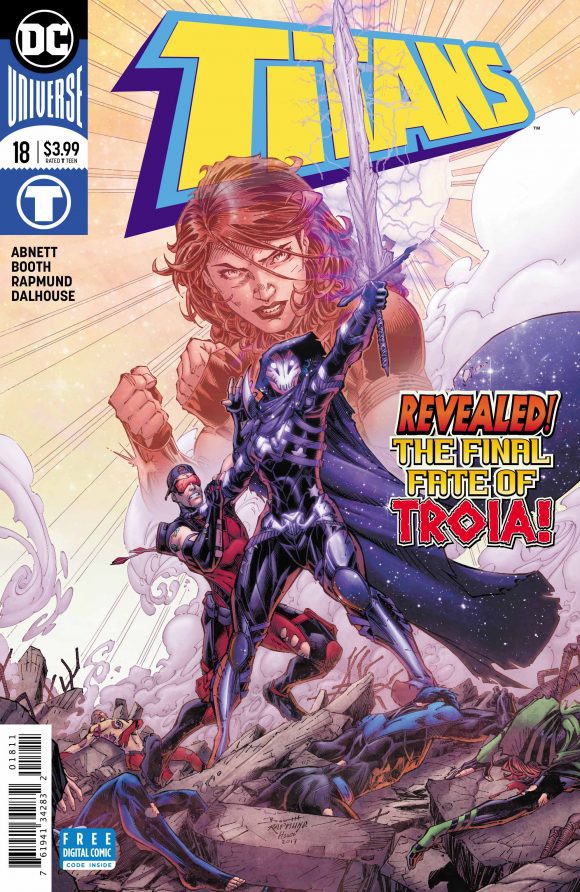 It’s an all-out brawl in this issue of Titans as the arc comes to an end with Donna Troy fighting Troia. Wally West has died, Duncan and Gnark are still mind controlled and the rest of the team has to try and battle them along with Psimon, Mr. Twister, and The Key. The one thing this issue is packed with is action.

Troia continues to try and get into Donna’s head and convince her that her future is inevitable. Donna and the team showcase one of the best things about the Titans and that’s just never giving up all the way to the end. Even with the situation as dire as it looks. Donna and Nightwing still lead the team full front and refuse to let the world fall into the hands of Troia and let their friends be lost under her control. Even though the other villains don’t really get many moments in this issue, I still very much enjoyed reading how the Titans struggle to defeat Troia. 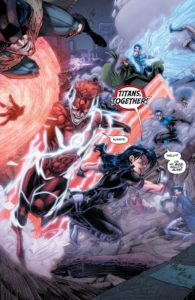 Watching her just take down her former teammates from a lifetime ago showcases how serious of a threat she is and knowing how they fight, she uses that against them very well. There are many themes through DC comics, but one of the essential ones is hope. Donna through this current series has been struggling with identifying herself on who she is and how she matters. You can feel that her will rises as she finds the strength inside of her to defeat Troia and save her friends. Whenever the Titans are out fighting and as long as any of them are standing, they find it in themselves to find a way to win. I believe that Donna thinks that if she defeats Troia here, she has hope that her future will be just fine. Maybe not all of her answers will be answered, but she will know she will not become this world destroyer that she seems destined to be. The culmination of this issue also has us see someone brought back as fast as he had left. With everyone standing in the end, the Titans still end on a fun moment as they capture the remaining villains.

With the future looking bright, the Titans come out of this arc stronger together as the team they are well known to be. Right now after everything they have gone through, it definitely feels like nothing will be able to break them apart. For they will always stand as Titans, together!