This is definitely the fastest moving issue to this point in the mini-series, which is generally a good thing. The only problem is when you have main characters like Bebop and Rocksteady it can make things a bit more confusing. I was questioning myself right away, wondering if I’d missed something in previous issues.

But that didn’t turn out to be the case. They just got caught up with a wacko who was smart enough to manipulate Bebop and Rocksteady (which doesn’t take much), but somehow wasn’t smart enough to realize their stupidity outweighs their muscle mass.

First, we find out what that green, glowing flash of light is from the end of that issue.

Second, and more importantly, learn why Bebop and Rocksteady were turning into humans. The payoff was…fine. It definitely wasn’t what I expected, but it wasn’t a mind-blowing surprise.

I thought they’d turned because they were thinking of becoming good guys and somehow that affected their mutant state. Somehow it added up in my head.

I just felt the payoff could’ve been better. It wasn’t bad, it just wasn’t as satisfying as I would’ve hoped.

That being said, the way Bebop and Rocksteady responded to the explanation of why they’d turned back into humans in the first place was well done. That’s something Bates and Weaver have done well, consistently throughout this mini-series: write the main characters well.

There are three cover options with this issue. Cover B by Ryan Browne is my pick. More than anything I like the way his colors contrast with the lettering on the cover and Weaver’s art in the book. It’s a nice change of pace. 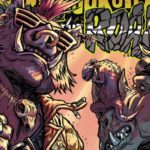