Batman scribe Tom King announced on Twitter that the highly anticipated series Batman and Catwoman set to launch in January has been pushed back to allow series artist Clay Mann to draw the entire 12 issue run without the need of fill-in artists. King said, “So Clay offered to do the whole thing, at 22 pages, but he’d of course need time. When the best artist in comics says “let’s do it right,” you don’t say no.”

King didn’t announce when the series would launch but did drop a bombshell in a preview of the cover to issue #1 which features the return of an unexpected villain, Phantasm. 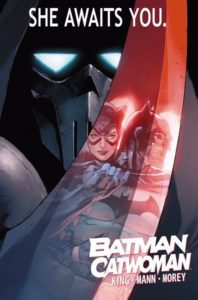 Phantasm was the villain for the Batman: The Animated Series movie which was released in 1993. The villain was revealed in the movie to really be Bruce Wayne’s former fiancee, Andrea Beaumont. How King plans to integrate Beaumont into the comic is still unknown. Will she still be a former fiancee? Will she know that Bruce is Batman? How will this upset the current relationship between the bat and the cat? Selina Kyle is not the kind of woman to tolerate competition.

Have you seen this:
Refrigerator Full of Heads # 1 (Review)

King has been playing up the romance between Salina and Bruce since he started his run on Batman. Fans were torn at the idea of the couple getting married and equally sobbed and celebrated when the ever-elusive Catwoman left Bruce standing at the alter. King left his historic run on the main Batman title to create this new twelve-issue series and promises big things are in the works.

In a series of tweets the detailed the need for the book’s delay King did some hyping of the new series by saying, “While working on the initial issues of Bat/Cat, @Clay_Mann_ and I started to realize we might have something good here, a Mister Miracle or a Vision in the world of Batman, an attempt to do what Frank did with DKR, a defining of the characters.”

Invoking the legendary Frank Miller run that was Dark Knight Returns is a tall order, but if anyone can deliver the goods it’s King who has already created some stunning moments for the caped crusader. As Batman fans young and old now hold their breath the drama is building to a crescendo as we all await this new series.

Have you seen this:
Batgirls, Wastelanders: Wolverine, King Spawn AND MORE: THE GWW PULL LIST