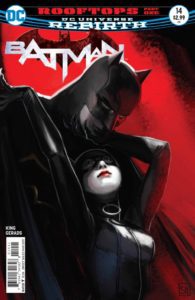 Tom King has moved on from the best arc of his early Batman career and found his way into the oft-teased romantic side of the hero. Issue #14, “Rooftops” Part 1 (of 2), retreads familiar ground by dangling the prospect of a love life in front of our titular hero and his will-they-won’t-they flame, Catwoman. It’s a story seen often, and this first part doesn’t do much to separate itself from other stories that have done the same, but it seems to set the table for a fresher take in Part 2.

The first thing you’ll notice about “Rooftops” Part 1 is that we have another new art team. Mitch Gerads who now exclusively works for DC/Vertigo, is a familiar companion to Tom King and handles the pencils, inks, and colors all on his own for the “Rooftops” mini-arc. They work together on The Sheriff of Babylon under the Vertigo umbrella, and their chemistry can be seen on every page as his adult and sultry blue night skies deliver an aesthetic that matches King’s writing extremely well. If you’re a fan of the times when the Bat and the Cat get together and nearly let their guards down (Selina always more than Bruce), you’ll certainly find a lot to love in issue 14, though most of it feels familiar to the many times they’ve danced around the subject before.

Still, the fate of Catwoman in the next issue is still a worthy cliffhanger. She’s meant to go away for life without parole, but it’s tough to see King locking her up so early in his story, so I’m very curious to see how it plays out. Even if she does go away, the history of “life sentences” in Blackgate and Arkham should inform readers that there’s a strong chance we see her again. 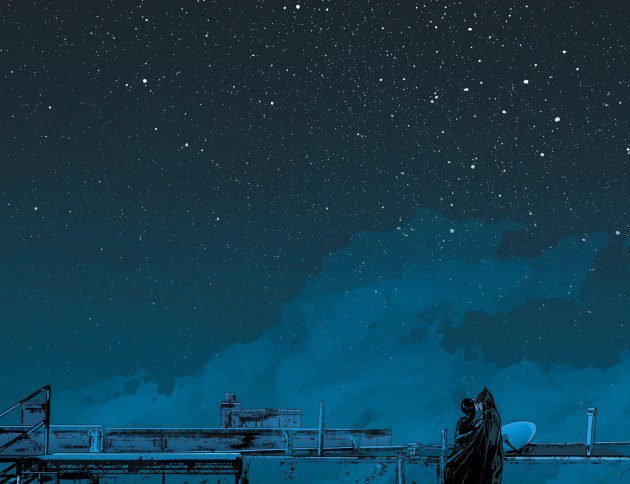 It really feels like two issues won’t be enough to tell this sort of “I Am Suicide” epilogue. I want to see more of it, and I suppose if Selina isn’t locked away at the end of issue 15 then we will, but if she is, that’ll leave huge question marks going forward. That’s really the most effective thing this issue does: it sets up for a great next issue. We see that a lot in single-issue reading, so it’s unfair to call it a huge gripe, I just hope King and company can either find a way to tell a satisfying conclusion to this Selina story, or better yet, find a way to keep her on the right side of the bars.