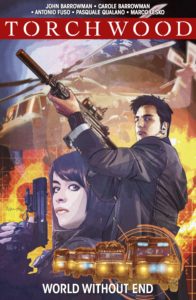 It’s been years since I’ve watched the television program Torchwood and its iterations like Torchwood: Children of Earth, so I’ve had trepidation’s about picking up the comic, thinking I’ve been away from the characters for too long to enjoy it.

Who better to write a comic about Torchwood, then Captain Jack himself? I can safely say, without a doubt, that John Barrowman, teamed up with Carole Barrowman, know how to write a Torchwood story, adding humor and Doctor Who tidbits, just like the television program – at least that’s how I remember it.

Gwen Cooper has been tricked into joining Captain Jack and his crew for another mission, with her husband deciding to decline in going himself. The confusing love between Gwen and Jack, of course, reignites leaving me shaking my head at the thought of Rhys, alone, fully knowing Jack and Gwen have a thing for each other. 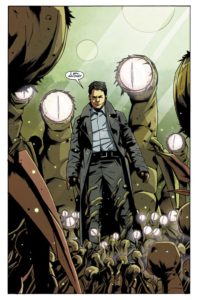 Poor Rhys Williams. Another man in the Doctor Who Universe who is pushed to the side while the woman falls for the charismatic protagonist. Sigh.

But back to where the action is. I loved the fact the Seal of Rassilon was placed in varying places throughout the comic, almost like it became the new symbol of Torchwood. Also, I love the name of Jack’s ship – well, he’s not really the Captain. The AI, named Mary Shelley, claims to be the real Captain. The ship is called K9II. Not a tin dog, but an awesome nod to the Whoniverse, none-the-less.

Something is wrong. Something is wrong in the universe, alien of course, and it’s time for Torchwood to step in. An old Time Agent has resurfaced to cause havoc, with the assistance of Lady Karina Sterling, a woman who happens to have access to Time Lord technology, owning a TARDIS (Time and Relative Dimension in Space) of her own.

The comic issues in the volume were no doubt the set up for the big adventure to come. It laid down the characters, who they were, and bringing them all together in one spot at the end. I’m certainly looking forward to what the next volume of issues will bring. 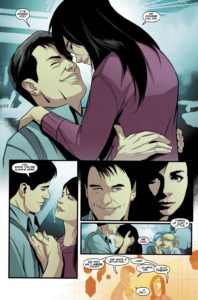 Hey, I prefer reading volumes. More story and I don’t have to wait!

Now the art, it was fabulous. There was a mix of drawing styles which was refreshing throughout the story. Some drawings were clean cut outlines, while some were geometric in appearance, and others looked sketched out. I can also say that Captain Jack and Gwen looked like, well, Captain Jack and Gwen. Their likenesses were captured nicely.

Since I’ve been out of the loop when it comes to the television program, I am not sure whether those on the K9II were established or not towards the end of the series, but even if they were, I already feel acquainted with this bunch of characters, thanks to the quirky introductions written when a new character appeared.

Quirks, references, and cheeky innuendos, oh yeah, it’s Torchwood, and oh yeah, John Barrowman is behind all this.

I wasn’t the same sort of fan of Torchwood that I was of Doctor Who, but this comic makes me yearn for the old days when I watched Torchwood on television. Needless to say, if you like Torchwood, you’ll love its rebirth in the comic book universe.