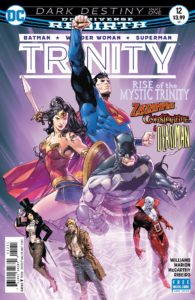 Batman has called on Constantine, Zantanna, and Deadman for help with demonic forces that have possessed the bodies of Red Hood and the Outlaws.

It appears that the Dark Trinity storyline’s sole purpose is to give writer/artist Francis Manapul a break after every story arc he works on. Which is fine because the magic stuff is really interesting, but there is a noticeable drop off in quality whenever Manapul isn’t involved. Not that the issues without him are bad, but this series has been one of the best to spin out of Rebirth. With that said, this magical side story is becoming more epic as it goes along, it’s already featured some of the best mystic characters DC has to offer.

The summary of this issue is simple: The Trinity called on the Mystic Trinity to help stop the Outlaw Trinity who have been possessed thanks to the Dark Trinity. 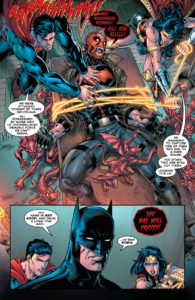 It’s impossible not to love seeing all these characters together conversing. I thought Rob Williams did a good job of getting everyone’s voices down but my only complaint is that Constantine seemed extra sleazy for some reason. He can be a scumbag at times but he was treading on unbearable in this issue. The use of Red Hood and the Outlaws was great and very fun. There is always that lingering anger for Bruce Wayne in Jason Todd. Not only does the team match up well with Superman, Batman, and Wonder Woman but they have an excellent run of their own going on since Rebirth. They’re just pawns in Circe’s game but they play a big role. It feels like a mini crossover event, which is impressive how Williams has slowly built to it.

Solid artwork all around. The demons had a great look to them, it was a very old school devil, which I dug. Sometimes artist try too hard and overdo it with demonic characters, and the design comes off too busy. Just the simple red color, horns, and wings will suffice. It fits with the look of possessed Red Hood too. There were some moments where it felt Saturday morning cartoonish(Red Hood’s mouth), but the action and design were good. Shout out to V Ken Marion for the Exorcist homage on the first page.

This storyline is turning out to be a lot of fun. It may lack that Francis Manapul touch that has made this series so special, but it’s jam packed with plenty of great characters and exciting action.