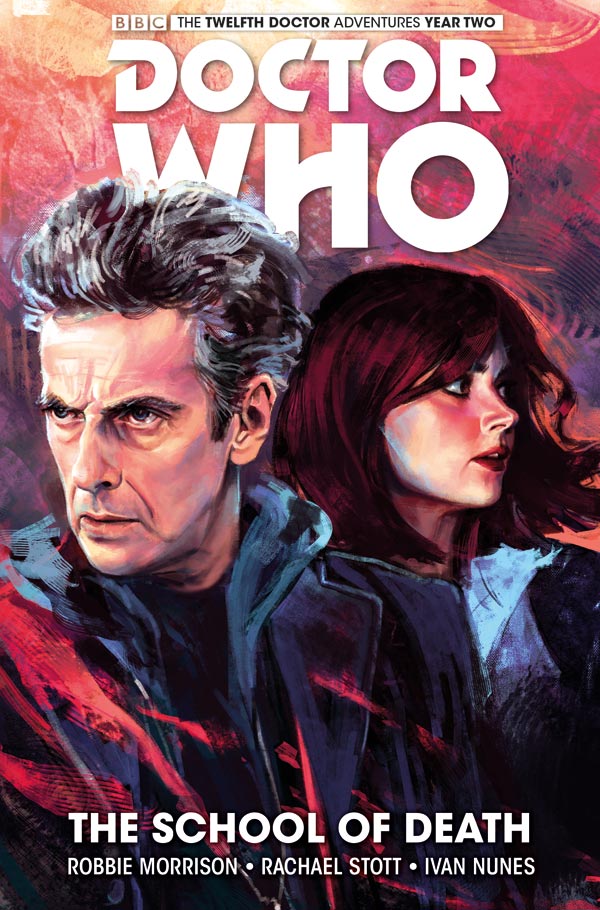 The beautiful cover was done by Alice X. Zhang. If you’re not familiar with her work, look her up immediately! Her work is gorgeous!

Now, I quite enjoyed this one. I really did.

First off, there’s a bit role at the start of Christel Dee, a mega-Who fan, co-creator of the YouTube Channel “Five Who Fans,” and the presenter of the official Doctor Who: The Fan Show. It was cool to see her drawn in comic form, and be presented as a fellow teacher, who happens to be friends with Clara Oswald.

Secondly, a classic foe returned: The Sea Devils, the underwater cousin of the Silurians.

Alright, now that I’ve got all that out of the way, I can focus without fangirling all over the place… Oh, who am I kidding, I’m going to fangirl all over the place. In fact, I’ve an artist’s crush on Rachel Stott. I get all giddy when I see her illustrations: they’re just so damn good! 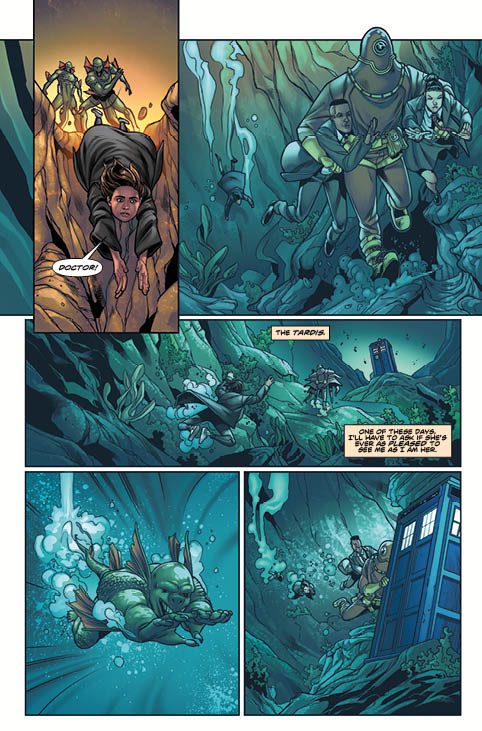 Students at this out of the way school slowly began to change from typical students, to, what could only be described as, mindless zombies, merely doing what they are told. These students go after one of their teachers, Christel. Knowing she’s in trouble, she contacts the only person she knows would believe her: Clara Oswald. Christel disappears, and Clara decides to come to the school, undercover, and take over the now vacant teaching position at the most stuffiest, non-amiable school around.

Of course, the Doctor wouldn’t hear of it. He wants to go undercover to! And undercover he is, dressed up in an old sea dog outfit as he tries to get some information out of the locals…who happen to be more acclimated with the see than he: these locals, are actually Sea Devils. A new batch of human-Sea Devil hybrids have been created and have all congregated in this small town – especially the school. They all appear human until water touches their skin, then they transform into, well, it’s already been established, but I mean…SEA DEVILS!!! YES! A classic monster and the Twelfth Doctor gets to battle them! Woo!

Sigh, if only this happened on television.

While battling these new Sea Devil hybrids, the Doctor picks up a trophy Swordfish, and claims it to be a new companion, Sonny, taking it everywhere, until eventually he throws it at a Sea Devil later in the story, and stabs it. Needless to say, he was very distraught over the loss of Sonny, and Clara could only remind him that it was a stuffed fish.

With the use of psychic powered head gear, and two willing and able students, the Doctor and Clara are able to stop the Sea Devils, and everything is okay in the universe. 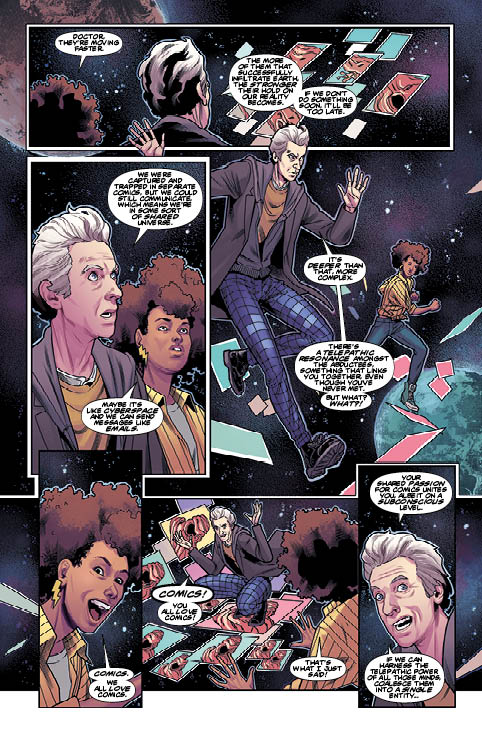 Until you turn the page that is…

The Doctor breaks the fourth wall, telling you to put down the comic, to stop smiling as he isn’t a drawn character on the page. He’s warning you not to turn the page!

But of course, you turn the page, and the Boneless jumps out to say hi.

And you realize, he wasn’t talking to you directly, but to the girl on the next page, who is taken by the Boneless. The Doctor had picked up a comic, “The Time Surgeon,” and soon became sucked inside, dwelling inside another universe, helping this new victim of the Boneless’ plan.

Needless to say, the writer took advantage of the comic layout to make a humorous page of banter between the Doctor and the new girl, about how he keeps changing places around her. Well, I thought it was humorous.

Thanks to the Doctor, of course, they, and everyone else who had been sucked into a comic book, are freed. Which is when the Doctor truly breaks the fourth wall to speak to you, and you only.

Now you may have noticed two artists. Rachel Stott illustrated the previous tale, while Simon Fraser – lovely gentleman, complimented my bowtie – illustrated the next tale called “Robo Rampage,” which sees the return of a very familiar robot. No, not K-9, but K-1, from the Tom Baker serial “Robot.” However, this one is bigger, badder, and is called K-2, the newest model. But in Doctor Who fashion, a quick blip of the sonic starts the dismemberment process of K-2. It ends happily, quickly, and with what I could only presume to be a very excited Osgood.

Before this is over, can I just bring to your attention this alternate cover? Twelfth Doctor meets David Bowie, how fab is that?!