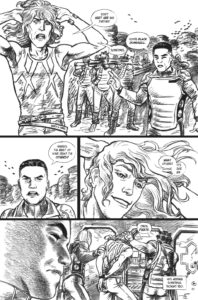 Just as the previous issue, Twisted Romance #3 has jumped into another time period. This time, it’s set in a semi-post-apocalyptic outer space. The planets are being taxed to the point of ruin and pirates are robbing the government and the military is hunting them. There’s one, in particular, they’re after, Black Domhall.

Captain Justin Rao is a rough around the edges, soiled to the core man who was beginning to lose hope in his missions and the state of things surrounding he and his crew. Loyal to his government, he kept his composure and stayed true to his mission. When they capture the infamous Black Domhall he was instantly curious. Expecting a huge crew and violent pirate, they only came upon a seemingly mild-mannered, long-haired young man who went quietly without hesitation. While in his cell he makes funny remarks while also hinting that he’s just as nervous about their lives in space as he is on the ground. The further and further you go into the book, you find out things about Dom, that’s his actual name, that shows how much more in common he has with Rao than expected. A heroic gesture from the pirate bonds them even more. 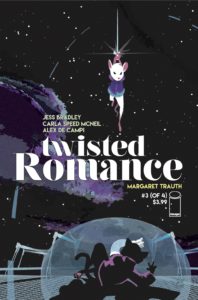 I love how Dom’s words finally resonate with Rao. It takes something super important and nearly tragic to finally do so, and a kiss. I love a romance story like this. Action, repressed anger, denial and the villain may not just be the villain at all. Dom opened up one of the most close-minded people there can be. All of his crew was shocked at him taking a day off. He didn’t even own civilian clothing. With an open mind, comes an open heart. Sometimes it takes the only person you’d never suspect to open it. 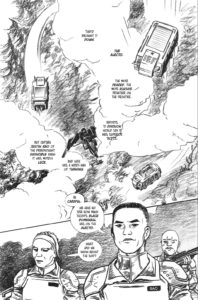 I enjoyed issue just as much as the previous 2. It’s a take on romance novels that are completely comic. De Campi found a way to make a non-romance reader into a total romance reader here. After the first installment, I thought it was going to be a continuous story. I’m glad it’s separate stories! I get to be intrigued and possibly fall in love with a different character. This issue was especially exciting. The futuristic setting and beginning pages really left me curious of the direction and who would be the Twisted Romance. Once I started to see where it was going, I thought it was brilliant. The drawing did not disappoint. It’s a more than unique style that shows the emotion of the characters. Even at times literally shrinking them when they may feel emotionally “small”. I’m sad the next issue is the last, yet excited to see how the series concludes!