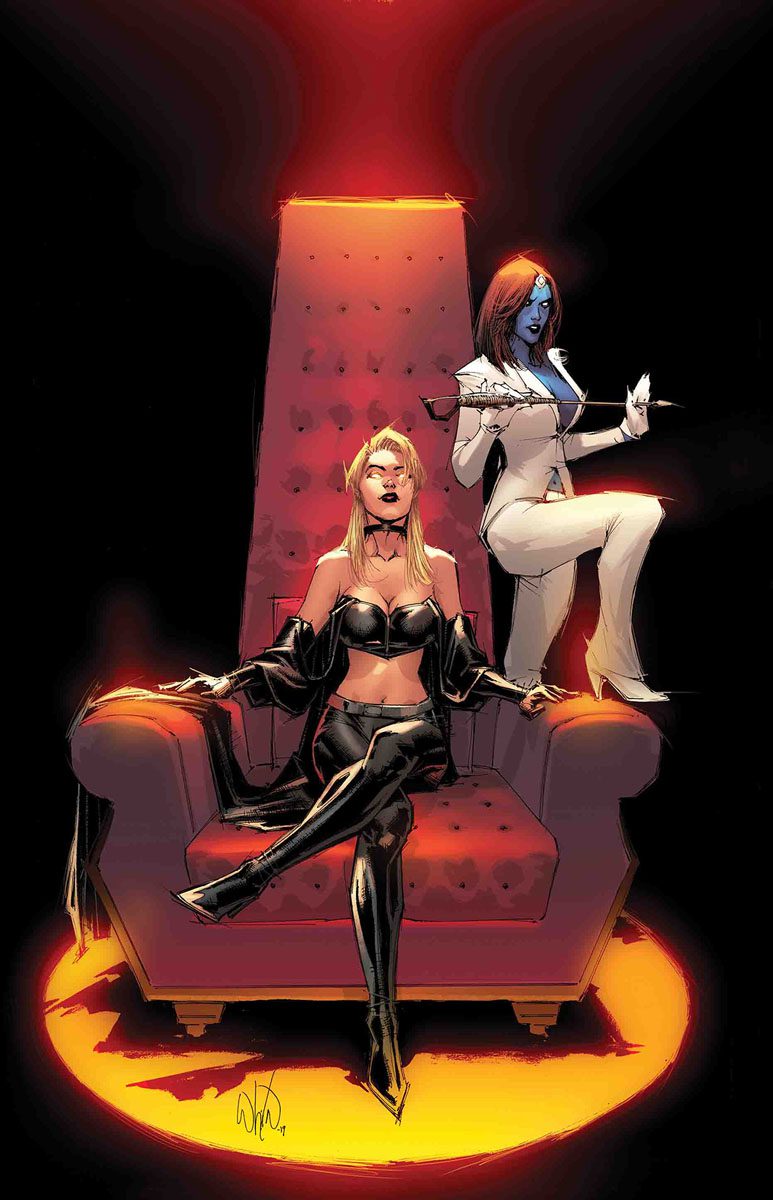 Warning: STRONG LANGUAGE AND OPINIONS AHEAD.

Uncanny X-Men was once the flagship title of Marvel comics, a banner carrier that led the company throughout the ’70s, ’80s and ’90s; this was the front runner of Marvel and one of the bestselling comics in the industry… not just for years, but for decades. It was the gateway in which countless Marvel fans first were introduced to the House of Ideas. It’s an institution within Marvel.

It helped launch the careers of Jim Lee, Marc Silvestri, the Kubert brothers, Joe Madureira, Olivier Coipel, John Romita Jr., Billy Tan… and countless other artists, writers, colorists, letterers and so on and so forth. It was Marvel’s biggest and best title…

…or at least it was.

The last two decades have not been kind to Marvel’s merry band of mutants. The X-titles were the primary victim of market over-saturation and lack of leadership. At the turn of the Millennium Marvel was churning out roughly a dozen monthly X-related titles and that doesn’t include the mini-series, one-shots, or movie tie-ins.

Take into account that Marvel’s focus at the time was launching the Ultimate line, restoring interest in the Avengers/Iron Man/Captain America/ Thor titles, and setting the company up to make a run in Hollywood as the early stages for the MCU were planned. The X-Men, who had always been a money maker, was pushed to the back burner and there the titles languished.

As the years rolled on continuity became cluttered, thanks to too many titles using the same characters, and too many summer events, series-wide cross-overs, and companywide cross-overs that the X-Fans could no longer keep straight who was who and what was what.

That’s not taking into account the numerous reboots, new number ones, new teams, and loss of direction that was all taking place at the same time.

The series-wide event that was Age of X-Man is winding down with confusing effects and the company is already touting their next mega event as Jonathan Hickman is taking over the writing chores of two new titles set to start in July: House of X and Powers of X… long-lasting changes have been promised by Marvel… but these are the same promises that the company has been making for years now and the line only gets worse.

I started collecting in 1994; my first issue was an X-title. (Uncanny 315 to be exact) I have seen all of this unfold slowly in front of me, but tonight just might be the final straw. I just might have read my last X-Men comic. 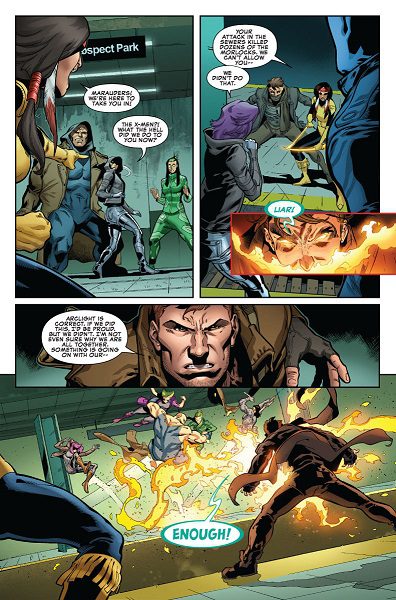 I am marking this issue as the ultimate low point for the X-Men franchise.

As a reviewer, it is my personal and professional obligation to place any personal bias I have aside when reviewing an issue and if I can’t remove that bias, then I don’t review the book/series/movie/TV show…whatever. It’s a hard and fast rule that I hold myself accountable to. It’s the reason I don’t trash Comicsgate with low scores and shit-talking on my reviews. That’s a personal bias that I can’t overcome so I don’t review their projects. There are also certain creators that I don’t agree with when it comes to past interactions or political statements and I avoid reviewing their work to remain professional. But this… this is too fucking much for one fan to have to sit through.

Matthew Rosenberg I’m sure is a talented creator and writer. I’m sure that he is a very nice human being and deserves success and acclaim for his work. But Matthew Rosenberg also now holds a record; an unpleasant record of undesirable distinction.

In six pages Matthew Rosenberg threw the Uncanny X-Men title and the X-Men in the gutter and crashed the book, and possibly the entire X-Franchise. Matthew did all of this in six pages.

While this particular run of Uncanny has been picking up press for killing off characters, the justification was that the timeline has become so dark that the events in which the characters find themselves have led to the unfortunate demise of some long-standing names, like Strong Guy and Wolfsbane. That’s reasonable… not a decision that I like, but one I’ve seen before and one I understand. But issue #18…

Let’s break it down…

The issue starts with Wolverine leaving the team. That should be a clue right there. When your most popular character has to excuse himself from the title, you know you’re in for a rough ride. But Wolvie has left the team numerous times, so I paid this exchange with Magik no mind.

Then come the worse six pages in X-History. THE. WORST. I’m even letting this top the time that the X-Men fought leprechauns and fairies when the team was hanging out in Banshee’s castle. This does far more damage to the series than that.

The X-team finds and fights the Marauders in the subway. The X-Men say the Marauders killed some Morlocks, the Marauders say that they didn’t; punches ensue… so far just standard comic crap. Then it happens…

Out of fucking nowhere, Chamber decides that he is just going to blast all the bad guys to hell and kills six people. Murder. Boom! But one of the Marauders survives and stabs Chamber through the chest, killing him. Murder. Boom! But that surviving Marauder doesn’t make it one more panel before Hope Summers pulls out a gun and shoots the guy in the head! Murder. Boom!

There is no justification for any of this. The entire time the Marauders say they are innocent. Chamber has no justification to his wanton murder of six people other than “We kill the killers.” WHAT?!? WHAT IN THE HOLY FUCK AM I READING???

And NO ONE, AND I MEAN NO ONE, EVEN ADDRESSES THE MURDER THAT HOPE COMMITS!!!!!! She blows a guy’s head off a point-blank range and there is no discussion of it!

Chamber, a character that was created in the early ’90s, who has been off and on X-teams for decades parts this world with these words, “Fuck you, Summers. You killed me. Fuck you forever.” (The language is censored but there it is.)

An X-Man decides to murder six mutants and then blames it on Cyclops? In the words of Will Ferrell’s character in Zoolander, “Am I taking crazy pills?!?”

In the span of six pages, Rosenberg slaughters the Marauders, turns two X-Men into cold-blooded murders, kills one of those X-Men and blames it all Cyclops for no discernable reason other than he was standing there.

This does not serve the plot, it doesn’t drive the story forward, it doesn’t have any impact other than to drive up the body count and drive home the idea “the world is a dark place and everyone hates the X-Men”. It does all of this with the subtly of a brick through a window pane.

The rest of the issue, (remember all of that was just six pages) is the X-team teleporting away from the scene of multiple homicides and right into a fight with Mr. Sinister…because at this point, why the fuck not?!?

Sinister uses Multiple Man’s powers to create clones of himself which merge into a giant Mr. Sinister (I shit you not) and the only way to destroy this giant Sinister are to have Havok go Super-Saiyan and almost blow himself up. The real non-giant clone of Mr. Sinister surrenders and the X-Men go off to cry about how the world hates and fears them. I’m not being trite in that last sentence, that’s a quick summary of what happens. The issue closes out with the reveal that the White Queen is at the heart of some evil nefarious deeds concerning the team…A.K.A. Emma is bad again.

All of this left me with the taste of shit in my mouth.

Rosenberg is slated to stay on the Uncanny title until at least August where he will be launching the Astonishing X-Men title. This is the worst news that the X-Franchise could possibly get. I thought that Chuck Austen’s run was the worst that I would live to see, but I was wrong. This is worse. At least with Austen it was apparent halfway through his run that he had no idea what he was doing and just started focusing on his own little storylines until they pulled him off the title; Rosenberg wants to get in the sandbox with everyone’s favorite toys, break them, take a shit on them, and then be applauded for being such a rebel.

Rosenberg isn’t a rebel or a great writer, at least not when it comes to the X-Men. He needs to be pulled now, the series delayed, and handed to anyone will some actual experience, because this shit ain’t cutting the mustard.

(Quick note: Just before this issue was released on shelves Marvel made the announcement that Jonathan Hickman’s two previously mentioned titles will be the only X-titles offered for three to four months. All other titles, including this one, are being temporarily canceled and relaunched at a later date!)

This is a storied title; in fact, it is a franchise that is a superstar maker. Some of the biggest names in the industry have gotten their start or their big break working on the X-Men. You can’t tell me that the biggest comic book publisher in the world, with the world’s best talent at its disposal, can’t come up with a better creative mind to reset the X-Universe than this? HORSESHIT!

I feel more insulted than I usually have when it comes to the X-titles over the last two decades. This beloved title has become the comic book version of the Cleveland Browns, the lovable losers, who will never know happiness.

Marvel, it is time to put the X-Men back where they belong at the forefront of the company and the comics industry. From a business standpoint, it has been big money for decades until you fucked it up. From a character standpoint, there are dozens upon dozens of characters to build up and mine. From a social standpoint, there is not a more relevant title to the ongoing struggles that countless fringe groups are facing today. From a creative standpoint, it has been the powerhouse of Marvel for generations and deserves better than this ham-fisted Tom Fuckery!