“These are strange times to be a Jew…”
-Michael Chabon, The Yiddish Policemen’s Union

Uncut Gems is the cinematic equivalent of pointing a gun to your head in a Russian roulette game. Even when you hear the click of an empty chamber and feel relief, you’re aware that a bullet may still be waiting for you. Adam Sandler’s Howard Ratner is a man who likes to pull the trigger one more time just for the thrill of possibly hearing that empty chamber click again.

As a jeweler in New York’s diamond district, Howard’s a high roller for the rich and famous, someone who can count NBA star Kevin Garnett among his trusted clients. In his dealings, where he is charming and persuasive, we see he is not a stupid man. He is, however, an addict prone to making stupid decisions. And any stupid decision he makes only heightens his need to take another hit from his drug of choice: gambling. A drug which has left him in debt to a number of very dangerous people.

The irony of a Jew dealing with this many problems on Passover of all weeks is not lost on Howard. Cultural Judaism is this film’s lifeblood, something that lingers in everything in Howard’s life, from his job, to the way his children are raised, to the way he deals with family. Catholicism has long been the de facto choice for depicting religion in crime films of any stripe. But when Jewish organized crime is depicted, it’s a secular affair, as is the case of Sergio Leone’s nearly four-hour epic Once Upon a Time in America. With Uncut Gems’ unabashed depiction of its protagonist’s Judaism, it allows just another hook for Adam Sandler to sink his teeth into. 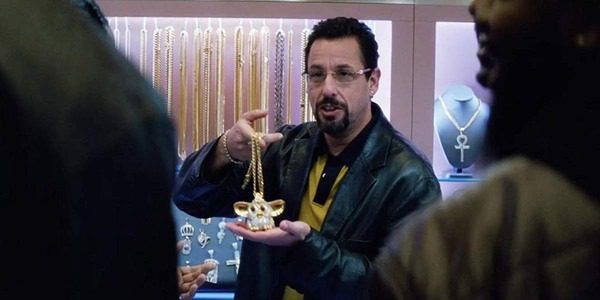 And it’s virtually impossible to picture anyone but Sandler in this role. Films like Punch-Drunk Love and Meyerowitz Stories have shown the potential that he holds. But it’s in this film where Adam Sandler the actor finally comes alive. While the New York of Uncut Gems is a beautiful, mysterious city filled with steam, neon lights in windows, tense nightclubs, and angry VIPs, Sandler ensures Howard is the only one we focus on. By alternate points fast-talking, fast-moving, angry, depressed, and humorous, it’s in Howard Ratner that Adam Sandler finally has a performance that allows him to use all of his strengths to their maximum potential.

Uncut Gems is not quite a perfect film. For such great actors, Lakeith Stanfield and Idina Menzel’s characters are wasted in roles that feel one-note and underwritten. While the film is almost entirely from Howard’s perspective, the only other character who really feels alive is Garnett as himself, who gives his performance a surprising amount of vulnerability.

But where Uncut Gems does succeed is in its central mission: to provide a nerve-wracking, intense cinematic experience anchored by a man we can’t take our eyes off of. As far as those experiences go, Scorsese’s After Hours and the Coen Brothers’ A Serious Man are both films that come to mind. But where those films are about men dealing with misfortunes happening to them, Uncut Gems is about misfortunes Howard causes to himself. Misfortunes he causes for the excitement of hearing that empty chamber click one more time.