Nothing more than a competent “Alien” knock-off.

The horror genre has seen many sub-genres come and go. “Found Footage” is pretty much dead, “Exorcism” films are beginning to be on their way out and Slashers are slowly creeping their way back in. Yet one sub-genre that never seemed to escape the 80s was underwater horror.

Flms like “Leviathan” and “Deep Star 6” were both 1989 deep sea creature features that hold up surprisingly well today. But that was basically the end of deep sea horror. That was until “Underwater” surfaced from the depths. *Wink wink*

Unfortunately, outside of a few cool action sequences, “Underwater” is simply nothing more than an unoriginal background film; where the nods to “Alien” feel more like plagiarism than homages.

Kristin Stewart gives it her all

Kristen Stewart gets an unfair bad rap. It’s been almost a decade since the “Twilight” saga ended and it’s time to stop associating her and Robert Pattinson to that franchise. Stewart is actually  the only performance that stands out in any way.

Now she does have that typical Kristen Stewart blank stare (you know the one I’m talking about) and it is prominent in the first act. However, as the situation starts to go south, you start to find out that Stewart actually has some decent range of emotions.

You feel for her character when she reacts to people dying around her. You want her to survive and are actively rooting for her to beat this situation. This is what happens when you allow actresses to act and not simply be a caricature for what sells.

Unfortunately, Kristen Stewart is about the only thing that stands out in an otherwise bland creature feature.

Funny this is, this may be exactly what fans of the “creature feature” are looking for. A simple plot where crew members are picked off one by one by an unknown monster and they have to survive. If that’s all you’re looking for then you’re going to get your moneys worth. If you were hoping to find something original and groundbreaking, you’re going to be sorely disappointed.

This film wants to be “Alien” so bad that it even goes as far to recreate certain sequences from that film. In a good movie, it could be seen as a respectful homage. But in a movie like this, it comes across as lazy.

There’s really nothing else to say about the plot. It’s your bare bones creature movie despite a few cool death scenes. A monster attacks and the crew members have to escape. If that’s all you’re looking for, then this movie will satisfy.

T.J Miller is the worst. The absolute worst.

The rest of the movie is nothing memorable, yet it does everything to a competent level. Miller and his attempts at humor on the other hand are cringe-level bad. Not a single joke lands and they constantly ruin tense situations and character-building moments. Instead of laughing out loud, you’re constantly rolling your eyes; waiting for this character to bite it.

Had he not been in the movie, it would have made for a much better experience.

Despite giving us a new entry in the underwater horror genre, “Underwater” has not a single original idea to give. Visually inspiring at times and containing a well-rounded performance from Kristen Stewart; that can’t be ignored.

Unfortunately, those praises are not enough to overcome a lazy knock-off script and its horrible attempts at comedy. If you have 95 minutes to waste, this isn’t a bad choice to do it but you could think of 500 better movies to waste an hour and a half to. 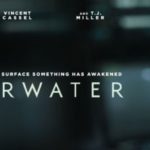 What Happens Next: Justin Richards