I started playing Valthirian Arc with the hope of drowning in a deep RPG game, however what I found was a game with solid gameplay but not enough to keep me coming back to it.  In Valthirian arc: Hero School Story, you play the role of a school principal that takes over a school. As a principal, your job is to expand your school, and it has everything necessary to succeed. From dormitories 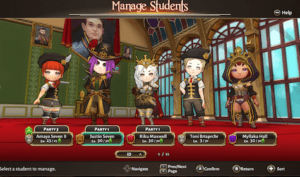 to cafeterias to even an armory, because why not right? You will spend most of your time fetching quests that will help you craft new classrooms or weapons, and you will spend a lot of your time, in the beginning, waiting for these fetch quests to complete.

When you are playing the role of the students the combat system for retrieving materials or for defeating monsters around the school is very solid. You can build a party up to four students and in the middle of combat, you can change to anyone in your party. Not only can you change mid-battle but you can also change the stance that you are wanting to take in battle. For example, if you want your party to be more aggressive you just simply press the “Y” button and your party will change into a more aggressive stance, but if you want your party to play more defensively you can choose that too. I like that the game gives you an option to play the way you want to play and you are not stuck with a particular play style. As a student, you can craft powerful gear that will help you along your quests. I found the option to craft weapons/gears useful since the game’s difficulty does increase as your power increases. Don’t get too comfortable with your students though, as your students finish progressing and finish their quests it’s time to let them graduate, so you must always keep a party ready to fill the hole that your previous team left. Once your students are maxed out you can promote to a higher class or you can decide to graduate them, but you have to choose something as your school’s rank depends on how many students graduate every semester. 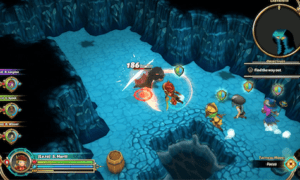 My biggest problem with the game is how during errand missions you either have to have enough students, at the right power level, to do other missions or you must wait for these missions to finish and do nothing in the meantime. I wouldn’t have had an issue with waiting on these errand missions to finish if there were mini-games or something to do on campus while I wait for my party to finish, but there is nothing to do. Let me tell you something, the wait is a long wait for you to get back to doing missions. This is where the game fails for me, the waiting period drags far too long that it totally takes you out of the experience. 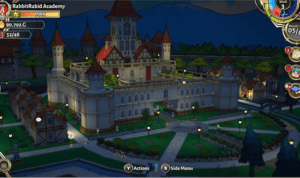 Once you are done waiting you are back to the same fetch quests that you have been doing all along, I really wish the quests would change it up a bit since the combat it’s actually a joy to play. This game follows the same formula throughout your playthrough, do fetch quests, wait on errands, graduate students, and build more facilities in your college to grow, all of these gets repetitive after a while.

With the long waiting periods and the repetitive quests that Valthirian Arc delivers its hard to recommend this game to anyone. With the Nintendo Switch being my go to console for RPGs taken that I can pick it up and take it with me wherever, I can think of many other games to play rather than Valthirian Arc. The solid gameplay is not enough to save this game, it’s unfortunate because this game truly had the potential for something special.