Tom Hardy plays Eddie Brock, a down on his luck loser living in San Francisco but has some sort of weird New York “palooka” accent for some reason. However, all the issues he is having is from his own doing. Sony goes to excruciating lengths to drive the point that he’s a loser from the beginning to the end of the film. So much so that it’s jarring and unnecessary at times. After stumbling upon a conspiracy, Eddie finds himself bonded to an alien species that is called a “symbiote”. The symbiote takes over Eddie’s body, gives itself a name and says that he and Eddie are stuck together so they can eat people. It’s a buddy cop movie but instead of cops, they’re alien cannibal man-eaters. Nice. SURELY this will be bloody, right? 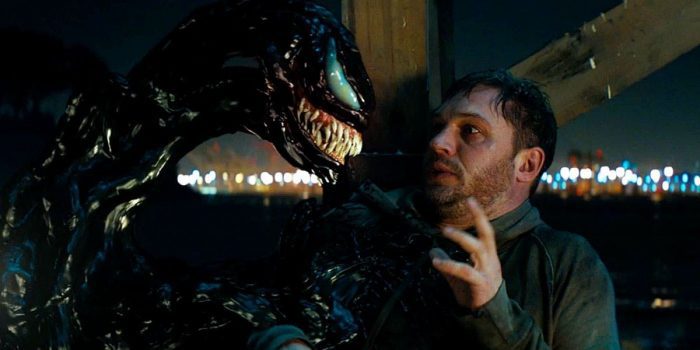 WRONG. And that was a HUGE gamble from Sony. Making a character whose whole existence is that he’s the ying to another character’s yang is tough to do when you don’t have the yang part. And without that yang, there’s no need to play with the same rules. I feel bad for the director Ruben Fleischer, because throughout the film you can TELL he wanted to do gore. The guy did do Zombieland by the way. And there were obvious scenes that you can tell were supposed to have said blood. Now I’m not some gore fest guy but HAVE YOU SEEN WHAT VENOM LOOKS LIKE? Showing him and what he does without the payload just seems like they’re going out of their way to be PG-13, which they are. And in an age where Logan and Deadpool films are making close to a billion dollars, this seems like a cop-out.

*sigh* You know, I used to BRAG about having 30+ years of comic knowledge. I was alive during some of the best (and worse) moments in comics history. I love when people have questions about old comics and being able to provide them with the location of certain issues to answer their questions. But sometimes this can be a hindrance. And I was reminded of this hinderance when I sat down to watch Sony’s Venom. I don’t like telling people to lower their expectations but…lower your expectations. Still, wish they could have used Spider-Man. Well, let me rephrase that, I wish they could have used TOM HOLLAND Spider-Man. Because Venom is the opposite of Spidey. That’s what makes him WORK. What’s next, a Joker film without Batman? Don’t be ridicu-…