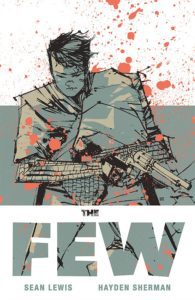 The newest title from Image Comics, The Few takes us to a dystopian future where the United States of America has fallen under a regime known as, The Palace. The story follows Edan Hale who, along with a baby in a gas mask, are discovered by two survivalist brothers looking to restore the Remainder States of America to their former glory.

The Few provides us with an action-packed opening to the series right out of the gate immersing the reader in this post-apocalyptic world of survivors and ravagers. Hayden Sherman’s illustrations are exceptional and give a unique tone to the story making this world of danger even more tangible. 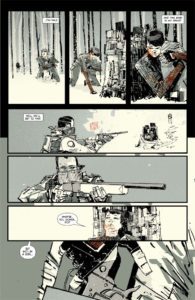 At times, the flow of the story can be confusing as the story does jump back and forth in time following Edan Hale through the woods as she meets a group of raiders called Ragers who answer to Siddah, their merciless and murderous leader. However, the art and the story complement each other exceptionally and as the story continues, it begins to take shape and give a sense of forward motion overall.

Have you seen this:
TLDR #5: Harleen / Power Rangers: Shattered Grid

The Few has all the makings of a riveting series filled with post-apocalyptic danger, secrets, and betrayal. I am most excited to see the developing conflict between The Palace and the mysterious rebel group, the Remainder States of America and what this potential war could mean for our characters and America as a whole.