We must accept finite disappointment, but never lose infinite hope in Hal Jordan and the Green Lantern Corps #14 REVIEW 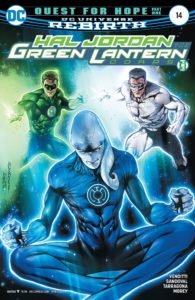 It’s a new day for the corps as new threats begin to emerge throughout the galaxy. After their encounter with Larfleeze and Brainiac, the Green Lantern Corps are falling  back into the role of the galaxy’s police force. As the corps converges on their new base of operations, the sentient planet Mogo, Guy Gardner is investigating something else and needs information from Space Cabbie. As the Lanterns gather, Hal Jordan has a pretty tense but friendly exchange with new Corps Leader John Stewart about the event that’s happening outside: The Green Lantern Corps and the Sinestro Corps are joining forces. 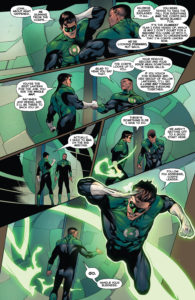 teams is to pair them off with each other. Meanwhile, Hal, Kyle Rayner and the Last of the Guardians of the Universe have decided there is another matter that requires their attention. The Green Lantern and the White Lantern travel to a distant world in search of something infinitely precious, hope. Whether or not they find it, or can protect it once they do, is unknown.

Have you seen this:
BASILISK #1 (REVIEW)

Robert Venditti’s writing in this book is clever in its depiction of the shifting dynamics between characters. He gives you a sense of John Stewart’s presence as leader, Hal and Kyle’s brotherly banter and even Guy Gardner’s tough-guy Detective shtick. There is a natural progression between these three, seemingly, separate stories that doesn’t elevate one over the other and keeps them all clear. Rafa Sandoval’s art is well suited for the characters and it conveys the motion of beings in space, but there are a couple of shots that distract from the action while Hal and Kyle are AB-Bro flexing. Ultimately, this is a good story that hopefully leads to something great.