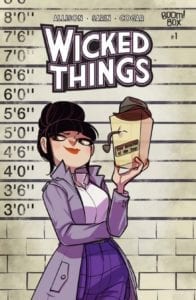 Having not read the series Giant Days, I wasn’t familiar with the world that Charlotte Grove lived in. I was expecting a title like Wicked Things to feature violence or destruction. Instead I was greeted with a bubbly and happy world. That isn’t to say Wicked Things #1 isn’t a fun and enjoyable read. Or that there isn’t some wickedness in this story.

John Allison gives the reader a character that is hard not to like in Charlotte Grove. She’s smart, full of energy and very smart. All these characteristics and her range of emotions are on full display from the opening pages. It’s in the midst of fending off her mother’s attempts to purge her room of junk Chalotte discovers she has been nominated for the Teen Detective of the Year (16-18).

After a train ride with Claire, her friend who nominated her for the award, Lotte greets the other nominees and attendees. I know I said this was a lively and happy world but this story has its share of monsters. They however show up as the materialistic and egotistic personalities that Charlotte meets. Each one makes her feel less and less confident of her own abilities, until she decides to show she can be just a snarky and rude back…still in her own jovial way.

It would be hard to tell this story without the artwork of both Max Sarin and Whitney Cogar on this issue. The characters design splits the middle between ultra realistic and overly cartoonish. This allows for such a range of expressions and emotions in this comic. Similarly the coloring stands out and things seem to jump off the page at times…it left me wanting Haribo Gummies.

I would have to say that Wicked Things #1 was nothing I expected. Instead it has a character with enough attitude and personality to provide a great first issue for this series. It also manages to deliver on its title as well. Something wicked is going on which isn’t good for Charlotte.