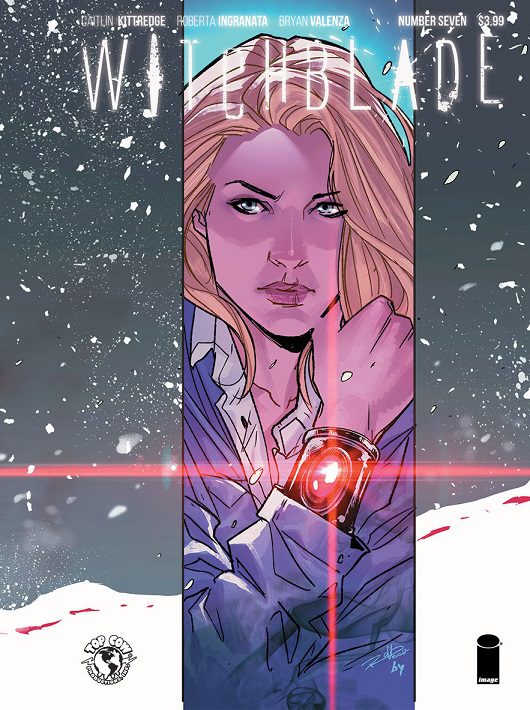 Witchblade is back now with issue 7 and a few months have gone by for Alex after the end of the last issue. We’re introduced to a new character named Maggie who comes into play later by attacking Alex and it, of course, has something to do with the Witchblade. We only get a small glimpse of her past but it raises certain questions about her and we’re not sure why she is out hunting the Witchblade. Alex, on the other hand, continues to use her abilities to clean up her city of any spirits and demons that are attacking the homeless. It’s great to see her embrace these powers and want to learn how to use them better. Now though she gets that bit of split personality going on as she talks to the Witchblade inside of her.

They have disagreements and it makes a very enjoyable conversation to read because to anyone else, she comes off crazy talking to herself like this. Regarding how the last issue ended with her friend Johnny showing up. He is mostly absent in the issue until he finally shows up to help Alex with Maggie. For some reason, he knows what’s going on here with why Maggie has shown up in Alex’s life and is finally going to explain about his return. In a weird way, this issue did feel a bit slower but that is because it’s trying to build a new mystery for us here. That’s been one of my biggest enjoyments of this series is it’s mystery cases. I’m also looking forward to seeing how Alex continues to grow as a character while at the same time, kick everyone’s butt around her.

The panel work and art for the issue does some really nice work in this issue, especially during the fight sequences with Maggie and Alex.   There’s a small chase that happens quickly in a subway station and later and alleyway fight. The way they illustrate the fights and chase along with the way some of the coloring is done to bring in you on the action really helps draw the reader and wanting to continue the page. In a way, I feel like anyone can jump in on this series with this issue, but I would definitely recommend picking up the first trade and jump on the series monthly here. While this is not the best in the series, it still offers a lot of what has made it very enjoyable for a new fan like me.