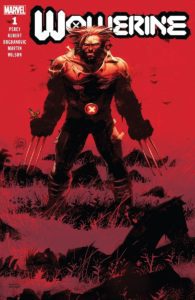 The Adamantium Animal has returned! This week we have a very large, double issue for the return of Wolverine. Two stories are contained within this very tight issue that takes you all over the world. For instance, we see Wolverine traveling to Paris, France and dealing with threats from all over heading toward Krakoa. We see a plethora of characters, both very familiar and also fresh faces, helping and hindering Logan on his journeys. Grab a beer and a cigar because you’re in for a treat!

Within “The Flower Cartel” we see Wolverine having a very hard time while regenerating with some very disastrous concerns around him. We get a glimpse into the previous five days that he’s been contending with a problem that is actually a much bigger, global concern. Logan then starts tracking down the immediate issue at hand only to be brought into a much harsher situation. In the second piece, “Catacombs”, a very old enemy rolls up onto Krakoa for sanctuary which doesn’t go over well with our hero. He then investigates the claims brought up that appear to be more than just skin deep.

The storylines contained in this issue are amazingly good. For instance, being brought into seeing the breadth in which Krakoa is towards the mutants made the initial start of “Catacombs” inviting and intriguing. The content of the story and dialog contained enriched the stories and pulled you into Logan’s emotional journey. The artwork presented by both artists is striking and helps pull you into the story. Some of the darkened hues and a couple of the tight close-ups of characters felt slightly disconnected but overall didn’t harm the flow. Overall, a very exciting, deep issue with outstanding feel and visuals.