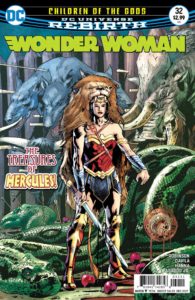 Wonder Woman fights off parademons and continues the search for her twin brother Jason, in an issue that reaffirms her parentage.

This was an enjoyable issue once it settled into Diana looking into her brother Hercules’ belongings. This story arc doesn’t just confirm a twin brother, but also her family ties as a daughter of Zeus. Some readers feel uncomfortable about the implications of giving Diana a sibling like this, but this issue does a good job of leading you into it. The way baby Darkseid is devouring demi-gods makes me feel like this won’t leave too much of an impact on the Wonder Woman lore. 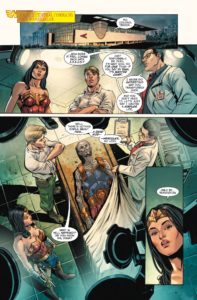 The art successfully captured each character’s emotions well. Wonder Woman was kind of put through a gauntlet of emotions while fighting parademons, reading Hercules’ will, and discovering her brother. The action scenes were great, and I appreciate the panel layout given how much dialogue was being given early on in this issue. Everything flowed really well. There are some moments where the art style looks a tad different, perhaps as a result of the different inkers. It all looked great, Sergio Dayila does some beautiful work.

The beginning felt like more rapid-fire plot points, but once Wonder Woman arrived at Hercules’ home, each panel had a chance to breathe. James Robinson does an excellent job of showing a somber Diana, that would be keen in reaching out to any siblings. I’m still not sold on the concept of the story but this was still a great issue and brings forth some exciting new revelations.