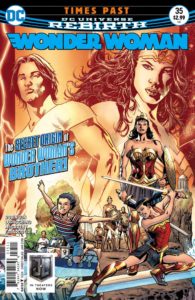 Glaucus tells the tale of how Wonder Woman’s twin brother Jason, was sent away as a baby and became a fisherman in Greece.

Jason learns that he was given away by Hippolyta, and he took it surprisingly well. This whole issue explained how his existence came to be and by the end you can possibly see how he was corrupted. His origin story is filled with parental figures abandoning him without so much as a word. Being isolated and living in the shadow of Wonder Woman would definitely give anyone a push down a dark path.

Emanuela Lupacchino who has done some great work for Starfire and Green Lanterns in the past was fantastic in this issue. Every character she draws exudes a lot of charisma. Inker Ray McCarthy and colorist Romulo Fajardo help give this issue a dynamic look despite not having many colorful characters or locations to draw. Though I prefer the artwork in this issue, the constant rotation of artist is wearing in me. Wonder Woman’s art has been inconsistent since the Rebirth creative team left the book. 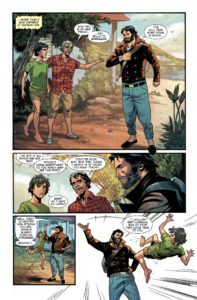 Even while staying positive, it’s hard to ignore the many problems that plague this issue, the main one being that Jason just isn’t a very interesting character. Something is bound to turn him evil in the next issue, even as a villain I don’t think anyone truly wants him to be part an integral part of this Wonder Woman series. This is an incredibly talented creative team, and it was still difficult to get through.

I should point out that I think James Robinson is an excellent writer who has been a part of some of my favorite comic books. I just don’t know what more I could say about this Wonder Woman storyline.