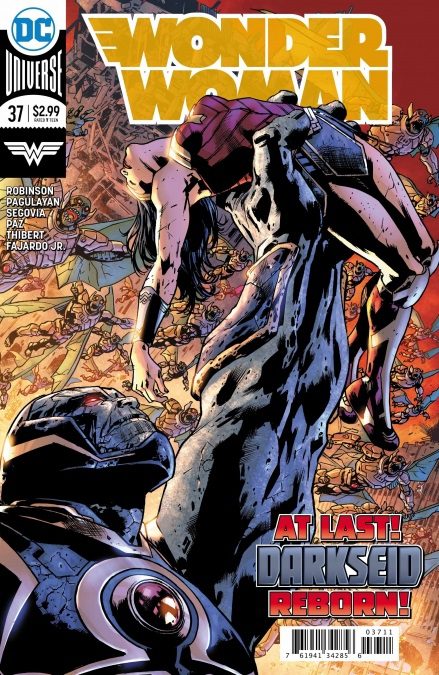 We’re at the conclusion of the Children of Gods arc in Wonder Woman and it is quite epic. I was thrilled going into this issue after we were introduced with Zeus showing up to help his children. With an old God Zeus facing off a new God, Darkseid, we are given an impressive battle between the two while Jason and Diana are left to deal with Grail. The clash between the Gods is quite a spectacle, and Zeus proves to be the God he is known to be with all his strength and a cape made of lightning. Even though Darkseid isn’t in his full state of power, he still has much of it and doesn’t go down very easily.

Jason’s arc is the one that can be overlooked, as it’s a typical trust and betrayal story with him realizing that all of his actions lately have been wrong. If it wasn’t 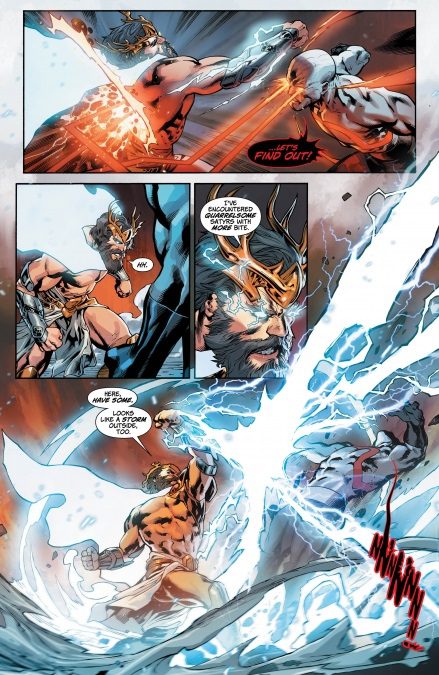 for the moment he and Diana shared at the end of the issue, it would’ve made his whole purpose here just generic. I do hope we get to see him a bit more and find out where exactly he will choose to go in life. He has powers but that doesn’t mean he has to be a hero like his sister. Diana has a very difficult struggle in this issue as she continues to want to help her father. The constant distraction from Grail and the people that could be killed from the battle keeps her busy and at the end of the fight, she is too late to help. We get this great splash showing Darkseid back to his full strength in the physical form that we are all familiar with and Zeus is lying dead beneath him. We see so much rage and sadness in Diana as she rushes to fight Darkseid on her own. I would’ve loved to see this but we are robbed of this as he and Grail flee away through a boom tube.

Even after dealing with the betrayal of Jason and death of their father. We don’t see her angry and lose control over this. She instead embraces Jason as family, wishing to know each other sooner and having them hold each other as they weep for their loss is touching as you can feel their love and sadness.