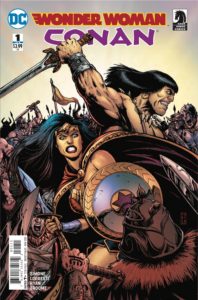 Conan the Barbarian happens upon an enslaved warrior who resembles a girl he met in his youth. The warrior is none other than Wonder Woman.

I thought Gail Simone did a fantastic job of dropping Diana into Conan’s world. Wonder Woman really can fit into anything. Whether it’s, World War I, Looney Toons, or a dark mature setting, a good writer can make it work. Conan saves a man, for a not so heroic reason, which leads him Wonder Woman, who has been enslaved and is missing some of her memories. I like the whole mystery of the little girl named Yanna. It’s probably not Diana, but maybe it’s some kind of alternate universe version of her. It adds intrigue and it makes it more than a simple two heroes meet and defeat a common enemy together story. 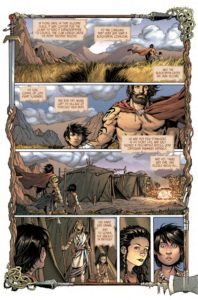 The art was great, I’m not familiar with the Conan comic books, but it the artwork looked perfect for Wonder Woman. I loved how the mud on Diana’s clothing and face made up her symbols. That was a nice touch. I was a little surprised by the brutality, sure it’s Conan but it’s a Wonder Woman team up and people weren’t getting beheaded in the last issue of her solo series. Not a complaint at all, just surprised. The whole issue looked like a million bucks.

I feel like this type of story would have been great for a graphic novel one-shot. Not because of the mysteries behind Diana’s memories or the Cimmerian ravens, but because there’s the inevitable explanation for how these two characters meet before we get to the action. Still, this first issue meshed their two worlds seamlessly and has me excited to read the next chapter.