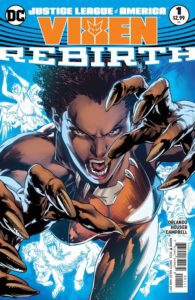 Justice League of America: Vixen - Rebirth is another example of how DC’s Rebirth series excel. It works as an origin story. It works as a story of empowerment. It works as a cultural commentary. And it works as an exciting super hero story. Co-authors Steve Orlando and Jody Houser craft a wonderful tale that creates a strong heroine in the ranks of DC’s post Rebirth world. Steve Olando wrote last week’s Atom one-shot and is at the helm for next month’s ongoing Justice League of America series. Jody Houser is a critically acclaimed comic writer of both the successful Faith series from Valiant and well received Mother Panic from DC’s Young Animal imprint. Orlando appears to be helping provide consistency for each of the four JLA Rebirth one-shots leading up to the launch of the team title in February. Houser provides the strong voice of the main character and creates the emotional heart of this issue.

Regardless of a reader’s familiarity with the character of Mari McCabe and Vixen, Houser and Orlando weave a tale that engages readers with emotion and excitement. The story cuts back and forth between McCabe’s young tragic history and a current crime that created tragedy for a young fan. While there are some changes to McCabe’s gift of the Tantu Totem and the violence in her African community, the resulting story resonates in today’s world. The modern storyline provides McCabe a chance to go 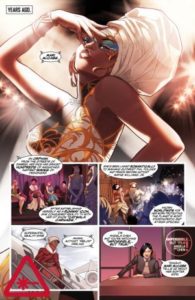 beyond her self-centered current practices and accept the gift and the responsibilities that come with the powers of the Tantu Totem. The totem as a narrative device creates a host of inventive opportunities for the heroine to engage a variety of animal powers to resolve any potential super hero situation. Vixen portrays a sense of empowerment and confidence that provides a meaningful message to any reader.

Houser has a history of creating strong female characters and her work on Vixen ranks right up there with the praise she has earned for Faith and Mother Panic. Readers can hope that this wonderful characterization has the chance to soar in her own on-going title. This one-shot works as a setup for Vixen, but the characterization leaves readers wanting more stories. Vixen will work well with the JSA team title, but with the character gaining visibility through the CW’s animated and live action shows, readers would be well served with an ongoing title written by Jody Houser.

Justice League of America: Vixen is not just an origin story, this is an introduction to a wonderful character who deserves a chance to soar.